Talking to the Ambassador of Uzbekistan Oybek Usmanov who paid a courtesy call on Prime Minister Shahbaz Sharif in Islamabad on Monday, the prime minister highlighted Pakistan’s vision for deeper engagement with Central Asia and the important role of Uzbekistan in this regard.

Shahbaz Sharif expressed satisfaction at the level of close and fraternal relations between Pakistan and Uzbekistan and emphasized the importance of further deepening bilateral trade and eco ties. 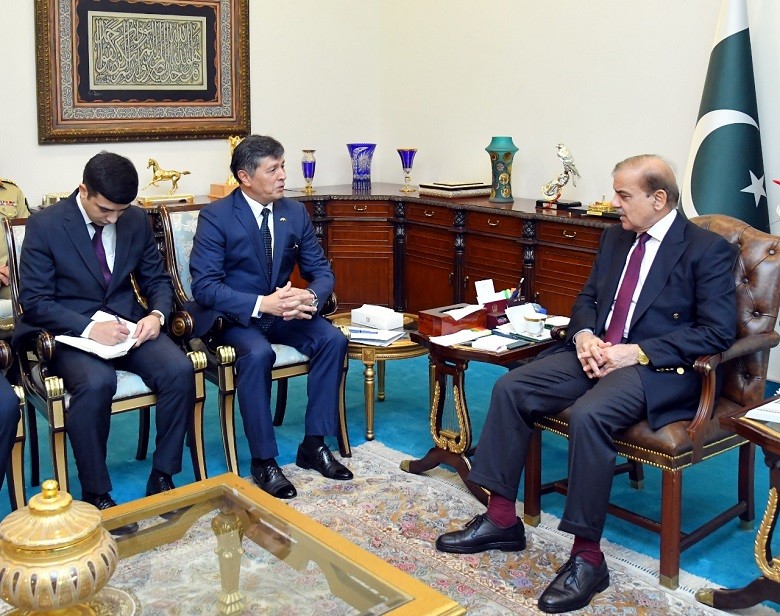 The prime minister underlined the significance of Trans-Afghan Railway Project to advance the connectivity agenda and promote regional prosperity. He also invited Uzbek investments in Special Economic Zones (SEZs) of Pakistan, particularly in industrial, electronics and agricultural sectors, which would accrue mutual benefits.

The prime minister underlined the importance of direct air connectivity in this context and urged upon the respective national airlines to start operations at the earliest to facilitate the movement of businessmen, students and tourists between the two countries.

While highlighting convergent perspectives of Pakistan and Uzbekistan on regional issues, the prime minister reaffirmed Pakistan’s strong resolve for lasting peace, security and stability of Afghanistan.

The Uzbek ambassador conveyed warm greetings from the President of Uzbekistan for Prime Minister Shahbaz Sharif.

The ambassador said that President Shavkat Mirziyeyov was looking forward to welcome Shahbaz Sharif to the SCO Summit at Samarkand next month.

Mati
Mati-Ullah is the Online Editor For DND. He is the real man to handle the team around the Country and get news from them and provide to you instantly.
Share
Facebook
Twitter
Pinterest
WhatsApp
Previous articleSyngenta Pakistan plants thousands of trees on 75th independence anniversary
Next articleOne terrorist killed in North Waziristan Operation: ISPR