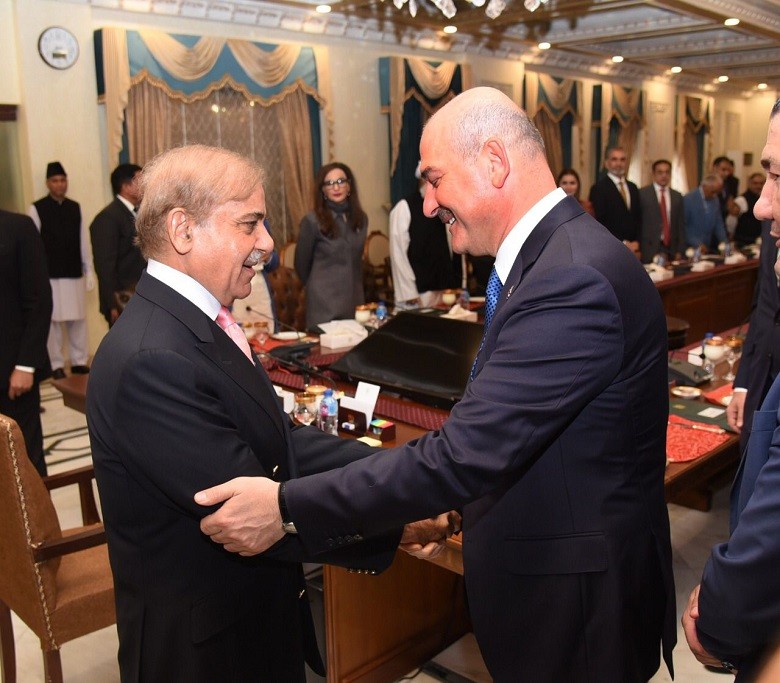 Talking to them, the prime minister expressed his profound gratitude to President Recep Tayyip Erdoğan for his phone call to offer sympathies and condolences over the human and material losses due to the floods and reaffirm Turkiye’s commitment to extend all possible support and dealing with this climate-induced calamity.

So far, 11 Turkiye military aircraft and 02 ‘Goodness Trains’ had been dispatched.

Prime Minister Shahbaz Sharif recalled Turkiye’s steadfast support and assistance to Pakistan during the 2005 earthquake and 2010 floods. He underlined that Turkiye and Pakistan were “two hearts, with one soul” and had always supported each other during difficult times.

Apprising the delegation of the catastrophe caused by flash floods, the prime minister stated that Pakistan was threatened with food insecurity in the country as millions of crops were devastated by the floods.

The prime minister looked forward to Turkiye’s assistance and overcoming the challenges caused by massive destruction to country’s infrastructure, loss of people’s livelihoods, food shortage and socio-economic insecurity during the reconstruction and rehabilitation phase.

The Turkish Interior Minister Suleyman Soylu conveyed heartfelt condolences from President Erdogan over the loss of precious lives and destruction of valuable property during the recent monsoon flash floods.

Suleyman Soylu underscored that Turkiye immediately established air and land ‘bridges and fraternity’ to provide relief support to the flood affectees. He added that today, during the Friday prayers, the people in Turkiye will pray for their brothers and sisters in Pakistan and mobilize further support.

The Turkish delegation is visiting Pakistan as a gesture of solidarity and support in wake of the recent flash floods in the Country.

The delegation is also scheduled to undertake an aerial on-site visit of the flood affected areas.

Mati
Mati-Ullah is the Online Editor For DND. He is the real man to handle the team around the Country and get news from them and provide to you instantly.
Share
Facebook
Twitter
Pinterest
WhatsApp
Previous article Role of Chinese Media and forthcoming 20th Congress of the Communist Party of China
Next articleCommon Local Legal Issues to Look at While Buying a Property