The 74-year-old columnist Attaul Haq Qasmi had resigned from the Post of Chairman PTV  over differences with the top brass at the Information and Broadcasting Ministry.

“In the prevailing circumstances in the Ministry of Information, Broadcasting, National History and Literary Heritage, it has become increasing difficult for me to continue to work for the restoration of [the] past glory of PTV,” Qasmi had said in his resignation letter sent to the Information Secretary Sardar Ahmed Nawaz Sukhera.

Attaul Haq Qasmi was appointed as Chairman of state-run PTV on December 23, 2015 by the then Prime Minister Mian Muhammad Nawaz Sharif. 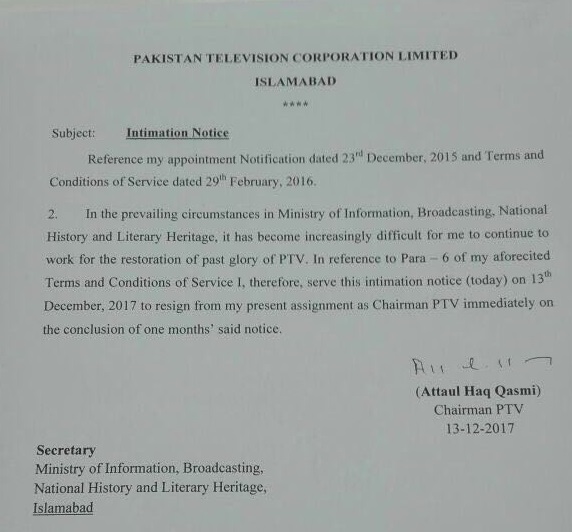 Sources said that the sacking of close aides of Attaul Haq Qasmi including Director Finance at PTV Umar Cheema also caused the emergence of differences between the former Chairman PTV and the Information Ministry.

Sources in the Information Ministry said that Qasmi was not comfortable with the new PTV management which indicated that his show “Khoye Hu’un Ki Justaju” (In search of lost people) was consuming higher financial resources of PTV while it failed to attract advertisements/business. Sources also indicated that issue of his show was shared with Attaul Haq Qasmi in detail by the PTV administration but he became annoyed with State Minister and Secretary Information when he was asked to review format of his show, and submitted his resignation.

Mati
Mati-Ullah is the Online Editor For DND. He is the real man to handle the team around the Country and get news from them and provide to you instantly.
Share
Facebook
Twitter
Pinterest
WhatsApp
Previous articleNEM or XEM integration with WeChat clarified with a dip in market price
Next articlePakistan condemns missile attack on Saudi Arabia