PM Imran orders not to dismiss or terminate any government employee

ISLAMABAD, Pakistan: Under the directives of Prime Minister Imran Khan, his Secretary Azam Khan has sent letters to heads of all government departments, directing them not to suspend any contract or permanent employee in the government institutions.

However, the letters stated, the order doesn’t apply to an employee suspended by the Courts. 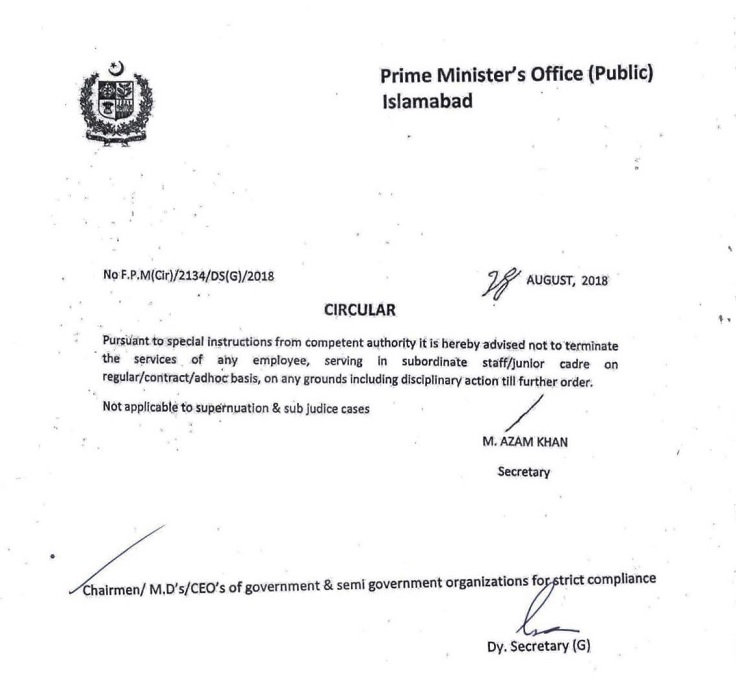 Honorable Primer Minister @ImranKhanPTI has ordered not to dismiss/terminate any Govt employee Regular/Contract/Discipline/AdHoc from their services.

This is not implacable on matters which are sujudice.

Here is PM of Every Pakistani not only PTI 👏🏼👏🏼 pic.twitter.com/aorWSAyJhw

Meanwhile, the Federal Cabinet meeting held with Prime Minister Imran Khan in the Chair ended in Islamabad after giving its approval to end discretionary funds of all federal ministries and divisions.

The meeting discussed the eight-point agenda which included establishment of a Task Force to bring back money taken abroad illegally, recommendations of the Ministry of Human Rights for safeguarding human rights, approval for the appointment of a Deputy CEO of PIA, appointment of Chief Commissioner for Afghan Refugees, submission of a report by the Ministry of Education’s Task Force, approval for abolishing discretionary funds for federal ministries and divisions, establishment of Pak-China Joint Research Centre on Earth Sciences, and approval of a summary for extension in contract of NIPC Chairman.

Mati
Mati-Ullah is the Online Editor For DND. He is the real man to handle the team around the Country and get news from them and provide to you instantly.
Share
Facebook
Twitter
Pinterest
WhatsApp
Previous articleISPR releases promo to pay homage to Burhan Wani, Kashmiris
Next article Google launches new search experience for job seekers in Pakistan, Bangladesh and Sri Lanka