MOSCOW, Russia: Prime Minister Imran Khan will meet the Russian President Vladimir Putin at Moscow on Thursday as the tension between the host and Ukraine has further mounted after Putin authorized military operation in the neighbouring Country.

Accompanied by a high-level delegation, Imran khan reached Moscow on February 23 for a two-day historic visit at the invitation of President Vladimir Putin.

Imran Khan was reached by the Deputy Foreign Minister of Russia Igor Morgulov at the airport, and was presented a guard of honor. 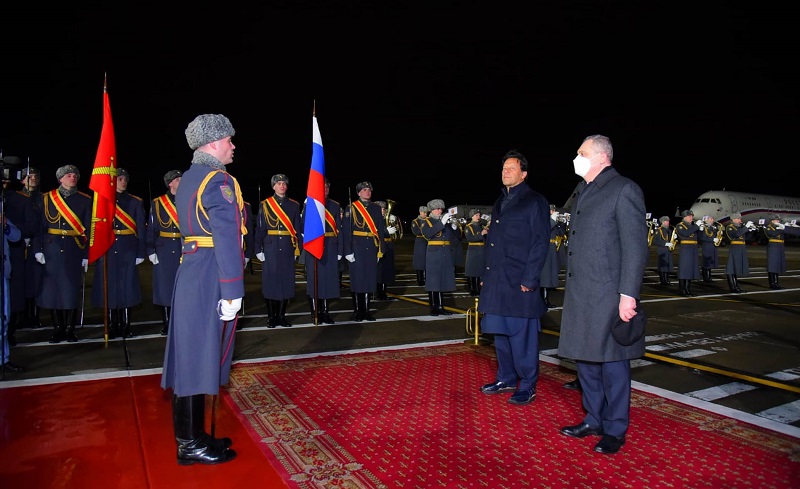 During his meeting with Putin, Prime Minister Imran Khan will exchange views on international and regional issues.

They will also discuss Pakistan-Russia bilateral relations, especially cooperation in the Energy Sector.

Meanwhile, in a televised address early on Thursday, Putin said that he had ordered to carry out a military operation in Ukraine followed by explosions heard in Ukraine’s Capital Kyiv, Kharkiv, Odessa, Mariupol and other Cities.

Putin said that Russia had no plan to occupy Ukraine but to demilitarize it. He also warned that foreign powers intervening in Ukraine conflict would witness consequences they had not seen before.

In his statement, Ukraine’s Foreign Minister Dmytro Kuleba declared the Russian action as a war of aggression and said that Ukraine would defend itself and would win.

As per reports received from the Ukrainian Officials, Russian strikes have hit military installations across the Country including airfields and weapons depots in major Cities.

The Ukraine’s military has also claimed that it has shot down five Russian jets and a helicopter.

In response to Russia’s action in Ukraine, the US President Joe said that Moscow was responsible for the death and destruction caused by the military operation. He said that the world would hold Russia accountable.

The tension at the Russia-Ukraine border escalated when Putin on February 21 announced to recognize Donetsk and Luhansk Republics in eastern Ukraine as independent states.