Talking to the Saudi interior minister, the prime minister praised the leadership role of the Custodian of the Two Holy Mosques King Salman bin Abdulaziz Al Saud in promoting Islamic unity, and acknowledged the endeavours of the Kingdom of Saudi Arabia for peace and security in the region and beyond. 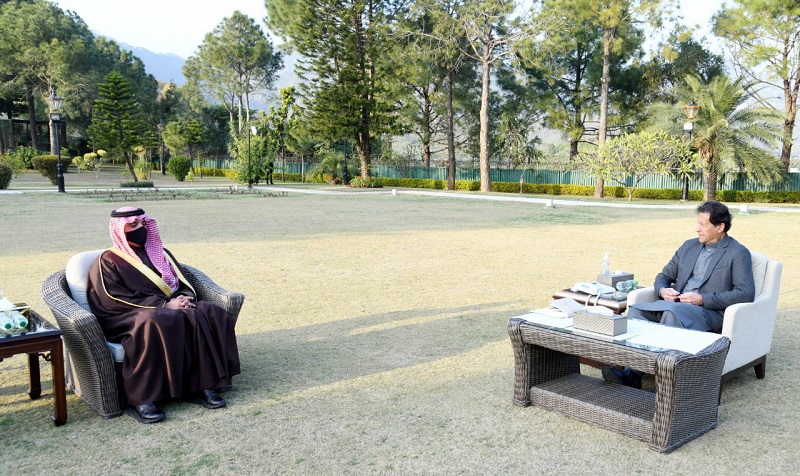 The prime minister also lauded the vision of His Royal Highness Crown Prince Mohammad bin Salman for KSA’s progress and prosperity and his invaluable contribution to the abiding fraternal relations between Pakistan and Saudi Arabia.

The prime minister particularly thanked the Kingdom for its steadfast support to Pakistan, especially in challenging times. He thanked the Saudi leadership for the recent financial budgetary support extended to Pakistan.

Noting the conclusion of the Agreement on Transfer of Offenders between the two Countries, the prime minister expressed the hope that a large number of Pakistani prisoners in KSA would be repatriated to Pakistan through this framework.

The Saudi interior minister conveyed cordial greetings of His Royal Highness the Crown Prince to Prime Minister Imran Khan and reaffirmed the close fraternal relations between Pakistan and Saudi Arabia.

Prince Abdulaziz bin Saud bin Nayef also acknowledged the positive contribution of Pakistanis in the development of the Kingdom and reiterated the resolve to work closely with the Pakistan side on all matters relating to his ministry.

Pakistan and Saudi Arabia are bound in a fraternal relationship marked by mutual trust and understanding, close cooperation, and an abiding tradition of supporting each other.