During his meeting with Custodian of the Two Holy Mosques His Majesty King Salman bin Abdulaziz Al-Saud, Khan expressed his view that Muslims are facing hardships all over the world and Muslim Ummah needs practical step for harmony among Muslims states while avoiding their contradictions.

According to available information PM Imran Khan also briefed King Salman bin Abdulaziz Al-Saud about grave situation in Kashmir and informed the King that Muslims in Indian Occupied Kashmir (IoK) are facing genocide and purge because they are followers of Islam.

PM Khan held a separate meeting with Crown Prince Mohammad Bin Salman Al Saud and discussed regional situation and stated position of Pakistan that any adventurism between Iran and Saudi Arabia would be disastrous for entire region particularly for countries like Pakistan bordering Iran.

During his meeting with Crown Prince with whom he has friendly relations, PM Khan stated that Iran-Saudi contra can destabilize entire region and Pakistan wished to play its role to normalize relations between two brotherly Muslim countries. 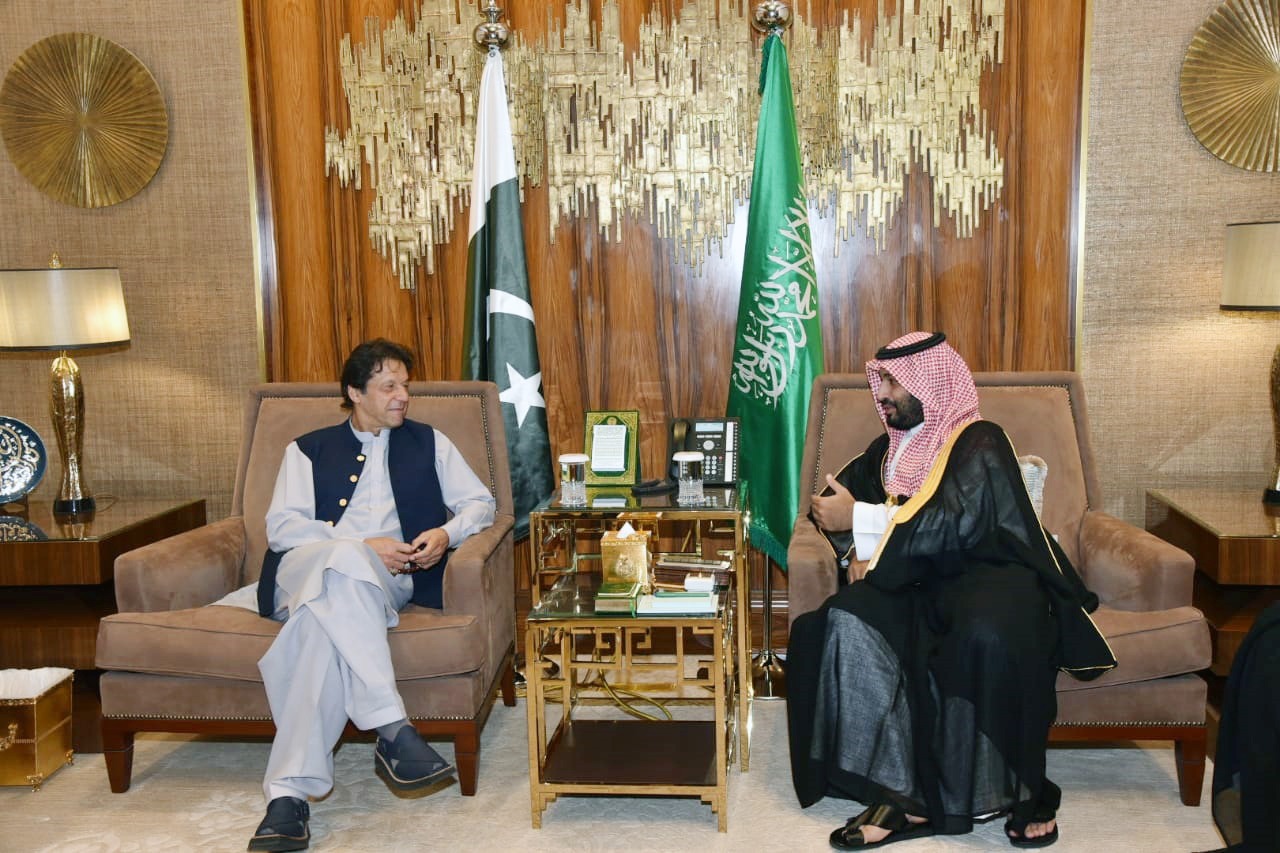 It may be mentioned that Pakistani Prime Minister Khan is facilitating to ease tension between Iran and Saudi Arabia and met Iranian President Hassan Rouhani and Supreme Leader of Iran on Sunday and reached Riyadh on Tuesday as part of his shuttle diplomacy.

It is pertinent to mention that while welcoming Prime Minister of Pakistan Imran Khan on Sunday in Tehran, President Rouhani said that Iran warmly welcomed his (PM Khan) good faith and efforts to restore peace and stability to the region and that Tehran will help him with that cause.

It may be mentioned that Russian President Putin also visited Riyadh on Monday and discussed Saudi-Iran contra with Saudi leadership.

“Prime Minister Imran Khan visited Saudi Arabia on 15 October 2019 and had separate meetings with the Custodian of the Two Holy Mosques His Majesty King Salman bin Abdulaziz Al-Saud and His Royal Highness Crown Prince Mohammad bin Salman. The visit was part of the Prime Minister’s initiative for peace and security in the region.

During these meetings, the Prime Minister underscored that the relationship between Saudi Arabia and Pakistan was deep-rooted and multi-faceted. The Prime Minister reiterated the resolve to further deepen bilateral trade, cooperation in the energy and investment fields, and people-to-people contacts.

The Prime Minister apprised the Saudi leadership of the grave human rights and humanitarian situation in Occupied Jammu and Kashmir including continuous lockdown, curfew and other communication restrictions for 70 days that had severely impacted the lives of over 8 million Kashmiris and seriously imperiled peace and security in the region.

Referring to the evolving situation in the Gulf, the Prime Minister stressed the importance of avoidance of military conflict and constructive engagement of all parties. The Prime Minister conveyed Pakistan’s readiness to facilitate efforts for de-escalation of tensions and resolution of differences and disputes through peaceful means.

The Saudi leadership reaffirmed its commitment to close ties with Pakistan and reiterated the resolve to deepen bilateral collaboration in all fields including trade, energy, security and defence. Saudi support on the just cause of Kashmir was reiterated and the importance of avoiding escalation of tensions and a peaceful resolution was stressed.

The Saudi leadership appreciated serious efforts of Prime Minister Imran Khan towards promoting peace and stability in the region and the impact of this initiative on de-escalation of tensions. The exchange of views in this regard was comprehensive and constructive. Noting the complexity of the issues and recognising the challenges involved, the two sides agreed to remain engaged and consult closely to take the process forward.

This was Prime Minister Imran Khan’s third  visit to the Kingdom during this year. Relations between Pakistan and Saudi Arabia are marked by mutual trust and understanding, close cooperation, and an abiding tradition of support for each other. The Prime Minister reaffirmed that Pakistan would always be shoulder-to-shoulder with Saudi Arabia.“