FeaturedGovernment of Pakistan
By Mati
July 10, 2020 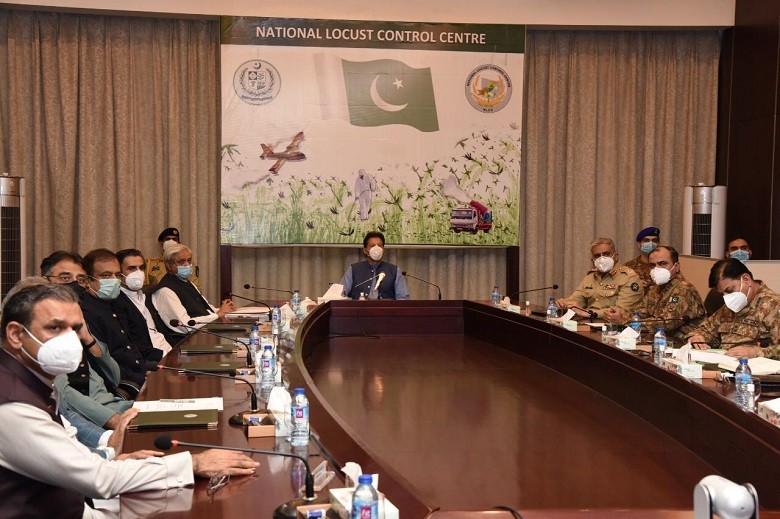 The prime minister was also briefed about the coordinated efforts being made for monitoring, survey & control, inter-organizational coordination, resource allocation & mobilization and awareness campaign for locust control at national, provincial and districts’ levels.

The meeting was informed that due to the trans-boundary nature of locust swarm movement; close liaison with the United Nations Food & Agriculture Organisation (FAO) and affected Countries in the region was being maintained to take timely pre-emptive measures.

The prime minister appreciated the governments of China, Japan and UK for providing technical and other assistance for locust control.

It was informed that a locust swarm movement is expected from Horn of Africa via Iran and another from India, for which necessary control measures are in place.

The prime minister accorded in-principle approval for Phase-II of the National Action Plan for Locust Control.

It was also decided that the affected farmers would also be compensated through this package.

In his remarks, the prime minister highly appreciated timely and coordinated response of federal and provincial governments including Pakistan army for effectively controlling locust attack and use of indigenously developed equipment.

The prime minister said that locust attack combined with the COVID-19 pandemic was a huge challenge for the Pakistan.

Imran Khan said that the government would undertake every possible effort for locust control since it involved food security of the country.

The prime minister emphasized that a coordinated national response of federal and provincial governments and organisations is required to cope with the expected locust swarm so that crop production is not affected.