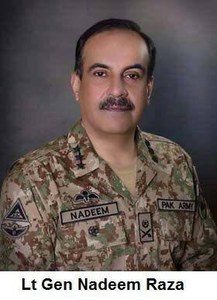 It may be recalled that notification for the reappointment of General Qamar Javed Bajwa as the Chief of Army Staff (COAS) for another three-year tenure has already been issued on August 19, 2019.

Following his appointment as the CJCSC, Lt General Nadeem Raza called on Prime Minister Imran Khan at his Office in Islamabad.

Lt General Nadeem Raza will replace the CJCSC General Zubair Mahmood Hayat who is set to retire on November 28, 2019.

Lieutenant General Nadeem Raza, HI(M) was commissioned in 10 Sind Regt in Sep 1985. The General Officer is a graduate of Command & Staff College Quetta and NDU Islamabad. He has also attended Inf Coy Command Course in Germany in 1994.
1/4 pic.twitter.com/o1Gw5BAFx2

The General Officer carries with him a varied experience of command, staff and instructional appts. He has been a BM of an Inf Bde, GSO-1 at MO Dte, COS of a Strike Corps.
2/4 pic.twitter.com/4mkkh6AfyN

On the instructional side, he has been on the faculty of SI&T, C&SC Quetta, and War College Islamabad and Comdt PMA. The General Officer has commanded an Inf Bn, Inf Bde along LOC, Inf Div in South Waziristan and 10 Corps.
3/4 pic.twitter.com/1bWaEOxUuW

He assumed the appointment of CGS on 10 Sep 2018. He is happily married and blessed with three sons and a daughter.
4/4 pic.twitter.com/eK1IZQ936H

Mati
Mati-Ullah is the Online Editor For DND. He is the real man to handle the team around the Country and get news from them and provide to you instantly.
Share
Facebook
Twitter
Pinterest
WhatsApp
Previous articleImran Khan telephones Sri Lankan PM Mahinda Rajapaksa, invites him to visit Pakistan
Next articlePM Imran Khan inaugurates various projects in Mianwali