ISLAMABAD, Pakistan: The losses of Pakistan International Airlines (PIA) decreased after 2018 when Pakistan Tehreek-e-Insaf (PTI) took over the reign of power, the Minister for Aviation Khawaja Saad Rafique told the National Assembly.

In a written reply to a question by Tahira Aurangzeb, the minister told the House on Monday that the losses that occurred in the airlines in 2019 amounted to Rs 52,602 million which were reduced to Rs 34,643 million in 2020.

The minister told that from January to September 2021, the PIA’s losses stood at Rs 42,346 (Loss before taxation). 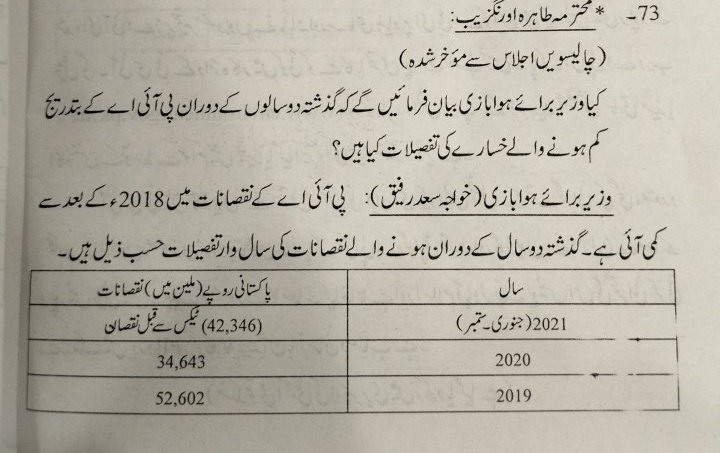 Replying to a question asked by Sheikh Rohale Asghar, the minister told that at present, there are 360 regular and contractual pilots in PIA.

Mati
Mati-Ullah is the Online Editor For DND. He is the real man to handle the team around the Country and get news from them and provide to you instantly.
Share
Facebook
Twitter
Pinterest
WhatsApp
Previous articleCheema meets top scientists of China’s Royal Group
Next articleBeaconhouse students’ Art Exhibition helps raise funds for play area at Children’s Hospital Faisalabad