The PHF, after a diligent process, spanning over months, selected an experienced team of Consultants comprising the former Managing Director and Project Director of the Pakistan Super League (PSL) Salman Sarwar Butt, and Haris Jalil Mir who is the former Chief Operating Officer of PSL-franchise Quetta Gladiators.

The agreement with the Consultants was signed on Friday at the PHF Headquarters in Lahore in the presence of Senior Officials from the PHF comprising the Chairman Selection Committee Olympian Manzoor Junior and Olympian Khawaja Junaid. 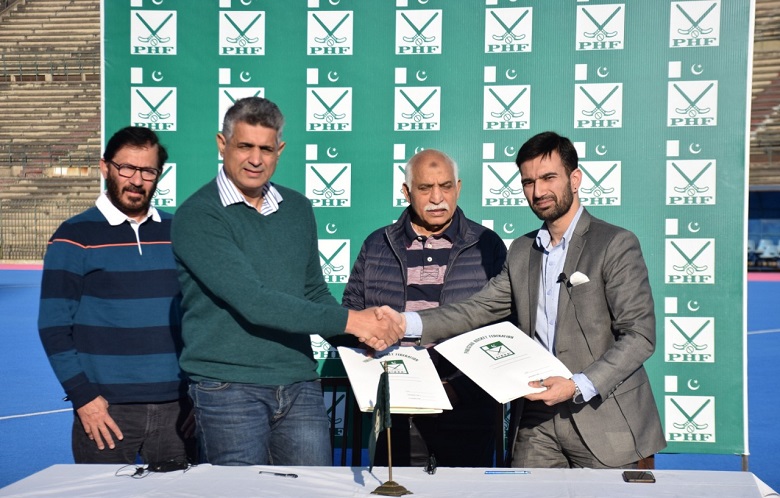 The Consultants will work alongside the PHF to design, develop, market, operationalize and manage the League through a League Office specially being established f at the PHF Headquarters in Lahore.

At the Signing Ceremony, the Secretary General PHF Asif Bajwa said, “At this time the revival of hockey in Pakistan is of utmost importance. The agreement that we are signing today signals the beginning of an ambitious project in the Country. We are very eager to have Mr. Salman Sarwar Butt and Mr. Harris Jalil Mir Consultants of this project, considering their domestic and overseas experience in managing sports franchise leagues. We are endeavoring to build a world-class franchise hockey league that to revive and upscale Pakistan hockey. We are entering a new era with a lot of hopes and we have with all sincerity selected the best professionals to undertake the challenging pursuit.”

During the signing ceremony, Salman Sarwar Butt said, “We are honored to partner with PHF in launching a franchise hockey league that will provide a platform to local top talent to showcase their skills alongside international players. We believe that there is a huge appetite for sports entertainment in Pakistan and long-term franchise leagues can optimally catalyze this potential if they are professionally developed, marketed, commercialized and operationalized. We aim to work with the PHF to make the hockey league one of Pakistan’s leading sports products!”.

“We look forward to working closely with PHF and all the stakeholders in making this league successful,” he added.

Further details relating to the Hockey League will be released in due course.