Next year the MCU (Marvel Cinematic Universe) will release 10 movies including series. There is probably a lot of amazing stuff coming out of the MCU.

Phase four of the MCU

The Phase Four slate that Marvel unveiled includes the following: 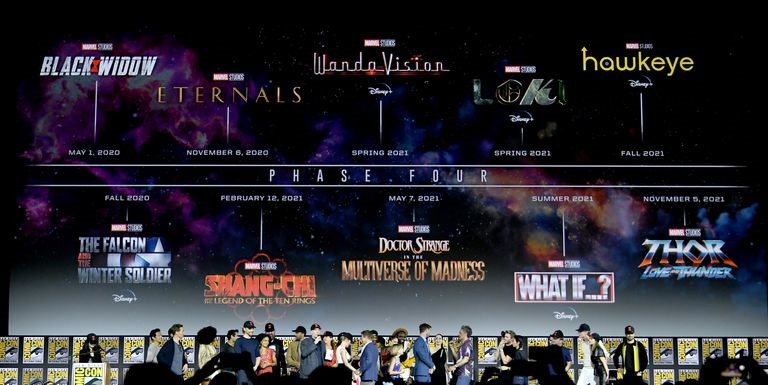 Kevin Feige (president of Marvel Studios) during the release event said that “didn’t have time to address where the Fantastic Four or X-Men would end up in the franchise, but that one additional project will be Blade, which will feature Mahershala Ali,”

The MCU is really changing the whole story here, Doctor Strange and the Multiverse of Madness is going to be the first horror film of marvel studios. In Thor: Love and Thunder, Natalie Portman will play Thor for this time. Several new heroes are also featured in the upcoming projects like The Eternals and Shang-Chi and The Legend of the Ten Rings, as the name suggest they are new to the MCU family but according to marvel studios they are hoping that these new movies will have wide, mainstream appeal.

A little about these two new movies is that, The Eternals centers on a group of beings known as Eternals who use their advanced skills to protect humans in the future. It was a comic book series created by legendary creator Jack Kirby who according to Kevin Feige was, “one of many many many things that we are actively beginning to have creative discussions about,” Shang-Chi will focus on the titular character, Shang-Chi, who devotes his entire life to bringing down his father’s criminal empire.

Mati
Mati-Ullah is the Online Editor For DND. He is the real man to handle the team around the Country and get news from them and provide to you instantly.
Share
Facebook
Twitter
Pinterest
WhatsApp
Previous articleIT professionals & entrepreneurs meet Prime Minister Imran Khan in Washington
Next article144 Pakistani Undergrads Head This Fall to US Campuses