ISLAMABAD, Pakistan: The World Press Freedom Day 2017 is being observed on Wednesday across the World including in Pakistan, a South Asian County among the most dangerous Countries for working Journalists.

The Day is observed annually on May 3 worldwide – as in 2017 with the theme ‘Critical Minds for Critical Times’ –  to highlight the importance of the freedom of press; however, it hasn’t been a bed of roses for working journalists in Pakistan as they find it extremely difficult to work freely and fairly in the environment of fear and restrictions. 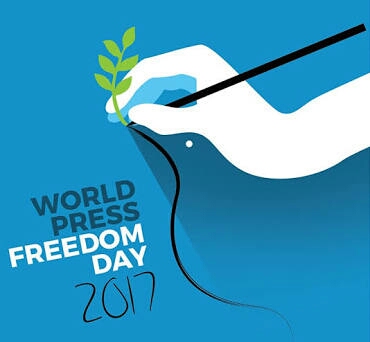 As per a report issued by the International Federation of Journalists (IFJ) last year, 102 journalists and media workers have lost their lives in Pakistan in the line of duty since 2005.

In addition to that, Pakistani working journalists have always been the soft target in both Civilian as well as in Military rule. As recently daily newspaper DAWN became sandwich between Prime Minister Nawaz Sharif-led Civilian government and Pakistan army when they once again locked horn over a ‘Planted Story’.

But despite the above mentioned facts, since the Pakistan Federal Union of Journalists (PFUJ) has been reborn after Afzal Butt was elected its President in March 2016 at Union’s biennial delegates meeting (BDM) in Quetta, it continues to stand by the Journalist Community in its struggles against various odds in the Society.

In connection with the World Press Freedom Day and to express solidarity with the journalists working in DAWN, the PFUJ led by Afzal Butt are holding rallies and setting up camps outside DAWN’s Offices and Press Clubs across the Country.

The PFUJ has also asked all unions of journalists to hold rallies today throughout the Country in solidarity with DAWN.

Meanwhile in her message on the occasion of the World Press Freedom Day 2017, the Director-General UNESCO Irina Bokova said that “Only the independence, the character, the objectivity and the good judgment of the journalist and the media can overcome the terrible storms of the new world that threaten freedom of information everywhere.”

Facing a crisis of audience identity, journalism stands before a horizon where old challenges are merging with new threats. The media business is being shaken to the core with the rise of digital networks and social media. Citizen journalists are redrawing the boundaries of journalism. Media accountability and credibility are falling under question. Online, the lines are blurring between advertising and editorial material, and we see private actors rising as key intermediaries, accompanied by new forms of ‘private censorship.’ These challenges merge with deeper transformations affecting societies. The Oxford Dictionaries Word of the Year for 2016 is “post-truth.” Combined with the concept of “fake news,” questions are rising that go the heart of free, independent and professional journalism.

All this comes at a time when free, independent and pluralistic media has never been so important to empower individual women and men, strengthen good governance and the rule of law, and take forward the 2030 Agenda for Sustainable Development — specifically, Sustainable Development Goal 16, to build just, peaceful and inclusive societies. The media must not only be a source of reliable information — it should provide a platform for a multitude of voices and mobilise new forces for tolerance and dialogue.

The stakes are clear. We need original, critical and well-researched journalism, guided by high professional, ethical standards and a quality media education — combined with audiences that have the right media and information literacy skills.

UNESCO is leading this work across the world, starting by standing up for the safety of journalists. Far too often, murder remains the most tragic form of censorship — 102 journalists paid the ultimate price in 2016. This is unacceptable and weakens societies as a whole. This is why UNESCO is spearheading the UN Plan of Action on the Safety of Journalists and the Issue of Impunity with partners around the globe.

Critical times call for critical minds. Today, I call on everyone to sharpen their minds to defend the freedoms that are essential for justice and peace.