If there is one thing that is synonymous with PMLN, that is “infrastructure”, or most importantly “transportation and road network and facilities”. Despite all odds and criticism, the PMLN government in Punjab never deterred from their transportation-related projects because they know that a good transport infrastructure is the lifeline of a country. Topping the list Lahore Metro Bus (BRT), Orange Line Metro (rail line) in Lahore, Multan Metrobus and the Rawalpindi-Islamabad Metro Bus Project.

Most of the criticism that PMLN’s ambitious transport projects have faced comes from the opposition party PTI. Chairman PTI, Imran Khan, along with other leaders of his party have been criticising the metro projects of PMLN from the day they were announced. From alleging mega corruption to inconvenience, PTI tried its best to rally all opposition parties against the Metro projects.

In recent years, PTI resorted to all sorts of tactics to malign the Punjab government and especially CM Shahbaz Sharif accusing him of getting kickbacks from these projects. He also criticized the cost for Punjab government’s metro projects on various forums saying that the cost of Lahore metro (PKR29b for 27 km) and that of Rawalpindi Metro (PKR 43b/46b* for 23/27* km) are unrealistic.

In an interview to Hamid Mir (GEO tv), Khan declared the Metro project as a gimmick and denied its relevance to betterment in the life of an ordinary man. On numerous occasions, he expressed severe distaste for such infrastructure projects and assured that KP government would not waste public money on Metro projects saying that if any such move was initiated in Peshawar, he’d oppose it. From nicknaming Metro bus to Jangla Bus, to tweeting multiple times against such projects calling them“misplaced priorities”, Khan made sure that such transportation facilities are considered unnecessary by a common man.

On several occasions, PTI MNAs ridiculed the Punjab government for focusing on the mass transit projects. PTI Secretary Information Punjab Andleeb Abbas criticized the metro bus calling it a huge burden on taxpayers’ money while Asad Umar challenged Pervaiz Rashid over the construction of Rawalpindi-Islamabad metro bus project and claimed that he could complete this project with onlyPKR 8b while the government was spending approximately PKR 43b on 23 km length. 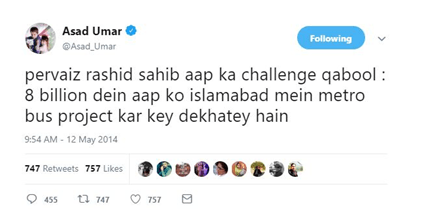 However, the most interesting part is that all this while when the PTI was criticizing Punjab’s transportation initiatives, its government in KP was hypocritically planning its own Bus Rapid Transit system in Peshawar. At first, the cost of the 27 km long was reported to be PKR 14b, then increased to PKR 40b and recently it has been reported to have crossed PKR 60b, thus exceeding the cost/km of Lahore and Rawalpindi-Islamabad Metro projects and making the funding for the project doubtful. A senior engineer associated with the Peshawar BRT even resigned citing “huge corruption” in the project as the reason though the allegations were denied by the BRT management. Several experts have questioned the reliability of the project quoting numerous and continuous alterations in its design and stating that time is one of the crucial factors that can prove to be fatal as far as the success of the project is concerned. In comparison, the Punjab government’s metro projects have always been completed on time with the exception of some delays caused by PTI’s dharna in Islamabad.

In view of all this, credit must be given where due. Despite all the opposition and undue criticism, the Punjab government, under the visionary leadership of Shahbaz Sharif, carried on with the Metro bus and rail projects in various cities of Punjab. The CM knew that in order to achieve his government’s target of progress and prosperity in the province, he must provide world-class transportation facilities to the people. During his press conference on June 5th, 2018, post completing his government tenure, Shahbaz Sharif stated that under his government the public transport system has been transformed in many cities of Punjab. He emphasized the importance of a good public transport systems saying that unless a cheap but honorable public transport system is provided to the masses, there is no hope for real progress.

Actions speak louder than words and there is no doubt that the people of Punjab and Pakistan will once again vote for the right people and for the right reasons.

*The figures reported are based on various conflicting sources.
By Sana Ali