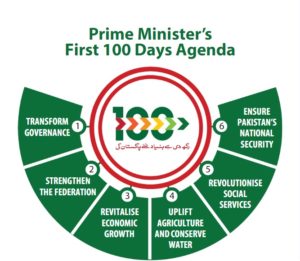 ISLAMABAD, Pakistan: The Pakistan Tehreek-e-Insaf (PTI)-led federal government on Thursday presented the report of its first 100-day performance since it took over the Centre in August 2018.

In this regard, a Ceremony was held at Jinnah Convention Center in Islamabad in which Prime Minister Imran Khan, Chief Ministers, Federal Ministers, government officials, media persons along with other persons were present.

This was for the first time in the 71-year history of the Country that an elected prime minister announced a plan of first 100 days.

Briefing about the PTI’s government’s first 100 days performance, the Prime Minister’s Advisor on Establishment & Lead on the 100 Days Agenda Arbab Shahzad said that the government led by Prime Minister Imran Khan had set 34 goals for his government to achieve, out of which 18 were completed while progress was underway in 16 projects.

Arbab Shahzad said that during first 100 days of PTI government, revolutionary steps were taken to change the working culture of the government.

The advisor said that in first 100 days, an Asset Recovery Unit was established that detected properties worth US$11 billion abroad. He said that notices have been sent to thousands of persons who are not tax filers. He said that focus has also been made on brining reforms in Federal Board of Revenue (FBR) as part of improving the tax machinery.

The prime minister’s adviser said that an Economic Advisory Council comprising eminent economic experts was set up to give an economic direction and guidance to the government on economic affairs. He said that steps have also been taken to improve ease of doing business.

Moreover, he said that work was done on delivery of speedy and inexpensive justice to the people by introducing legal reforms.

The advisor further said that significant achievements have been made in FATA Secretariat. He said that the federal government has taken the responsibility of giving three percent to FATA from divisible pool. He said that for a faster development of FATA, work will be started in next two months.

For Balochistan, he added that, to remove the grievances and alienation of Baloch populace, purpose oriented and meaningful talks are being held between government and Baloch leadership.