ISLAMABAD, Pakistan: Responding to numerous complaints, the Pakistan Electronic Media Regulatory Authority (PEMRA) has issued instructions to all Regional Offices to ensure that none of Ahmadiyya Channels operate in Pakistan and warned strict action over non-compliance by any distribution service licensee.

As per a notification issued on May 28 by the PEMRA Director General (Operations-Distributions) Muhammad Farooq, the authority has been receiving numerous complaints for a while against the distribution of illegal Channels especially Ahmadiyya Channels including MTA, MTA-1, MTA-1-Al-Awla, Ahmedia-1 (Urdu), etc.

However, it maintained that despite an inquiry having been conducted, specifics of such distribution networks remain unavailable.

Therefore, the authority directed its all Regional Offices to remain vigilant and to ensure that no such illegal Channel is carried by any distribution service licensee. 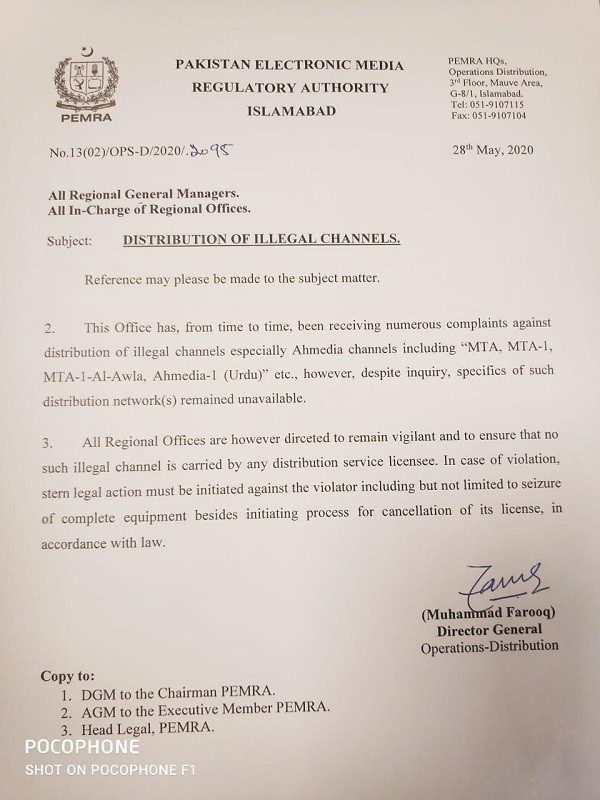 The PEMRA directed them to initiate stern legal action against the violator if any violation is found.

Furthermore, it noted that the action will also include the cancellation of the license besides confiscating the equipment.

Meanwhile, in a statement, the President of 4th Pillar Media Farooq H. Mirza has said that efforts by the press association of journalists have yielded fruits as upon its complaint, the PEMRA for the first time has initiated an action against illegal Channels operated by Ahmadiyya Community which were desecrating the Holy Prophet Muhammad (Peace Be Upon Him).

The 4th Pillar President revealed that the Kidzone Plus Channel is also running programs with cartoon portraits of Prophet Muhammad (PBUH) and airing them in Islamabad, army and remote areas through Dish TV.

Mati
Mati-Ullah is the Online Editor For DND. He is the real man to handle the team around the Country and get news from them and provide to you instantly.
Share
Facebook
Twitter
Pinterest
WhatsApp
Previous article
PM Imran Khan gives go-ahead for launching “Protected Area Initiative” under Green Pakistan program
Next article
Restrictions on tourism to be relaxed in Pakistan: PM Imran Khan
Share
Facebook
Twitter
Pinterest
WhatsApp