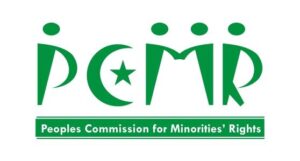 LAHORE, Pakistan: The Peoples’ Commission for Minorities Rights (PCMR) has expressed its dissatisfaction with the statement made by the Chairman of the Parliamentary Committee on Forced Conversions Senator Anwarul Haq Kakar.

In a Press Conference in Islamabad, Senator Anwarul Haq Kakar had rejected the validity of the complaint by minority groups regarding forced conversion of Hindu and Christian girls, and said that such marriages were contracted out of the will of the girls and due to economic circumstances.

“It would be tantamount to covering up the multiple crimes linked with forced conversion and encouraging more violations,” said a joint statement issued by the PCMR Office Bearers said over remarks by the Senator.

“We have serious reservations about the manner the fact-finding was conducted in Sindh on October 6-9, 2020. Moreover, the Parliamentary Committee’s analysis of the situation and data raises doubts about their comprehension of the issue. The recent judgments honorable court will suffice to prove that Committee has come to inapt conclusions on the issue,” they said.

They further said that “We are dismayed by the position taken by the Chairman of the Parliamentary Committee. If the Committee’s performance in the past 11 months of its existence can produce such denials of facts, we would like to question what steps were taken to make the functioning of the Committee independent, transparent, comprehensive, and rigorous. Pakistan needs to be salvaged from the blatant denial in order to construct a positive image of Pakistan tarnished by gross human rights violations. We reject this position of the Chairman of the Parliamentary Committee and urge serious, in-depth, and comprehensive fact-finding of the issue involving genuine stakeholders in the process.”

Moreover, they said that “We are disappointed also because the Committee’s work could have helped restore peoples’ confidence in the parliamentary processes which stands jeopardized at the moment.”

The PCMR urged the Committee to revisit their position in order to save the repute of the Country, social cohesion, and respect for fundamental human rights, particularly the religious freedom protected under the Constitution of Pakistan.

Mati
Mati-Ullah is the Online Editor For DND. He is the real man to handle the team around the Country and get news from them and provide to you instantly.
Share
Facebook
Twitter
Pinterest
WhatsApp
Previous articleOpposition will not succeed in its nefarious designs: Shibli Faraz
Next articleIs Online Baby Shopping A Good Idea?