ISLAMABAD, Pakistan: Speakers at a penal discuss stressed the need for declaring an Education Emergency and spending at least 4% of GDP on education in order to bring improvement in the long-neglected Education Sector.

They gave various recommendations in an online panel discussion on the topic of “Debating Pakistan Education Policy 2021”, which was successfully concluded on Thursday.

The recommendations were given so as they could be incorporated in the new Education Policy which is going to be announced on March 23, 2021.

They suggested allocating one-third of the education budget for Universities, discouraging rote learning, besides improving assessment at the intermediate level, respecting, protecting the autonomy of universities and academic freedom at University Campuses. 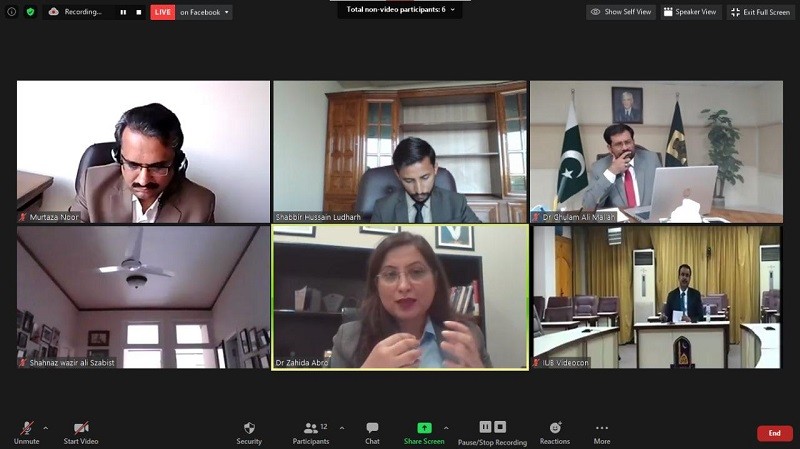 Moreover, they also suggested to review recent undergraduate and PhD policies, formulation of policies in consultation with stakeholders, introducing one window procedure for award of charters, recognition of universities and approval of new academic programs to avoid years-long delays, encouraging the role of the Private Sector in enhancing access to higher education, ensuring the effective engagement of students through strengthening student societies/clubs and directorate of student affairs and restoration of 75% tax rebate for researchers.

The Vice-Chancellor University of South Asia and former Education Minister Punjab Mian Imran Masood highlighted the importance and contribution of the Private Sector in Higher Education and recommended equal treatment to Public and Private Sector Universities in terms of policies and funding.

The Vice-Chancellor GCU Lahore Dr. Asghar Zaidi emphasised over innovations in student societies/clubs as they should start thinking about contributing to the societal issues rather than restricting themselves to the university/ departmental level activities only.

The Rector International Islamic University Islamabad (IIUI) Dr Masoom Yasinzai suggested for award of 50 Scholarships for each faculty of nine Public Sector Universities of Balochistan at the Chinese Universities so that they, as trained human resource, may play an effective role in CPEC related projects.

They also recommended that policies in higher education should be aligned with ground realities and based on proper situational analysis, data, and proper consultation with the stakeholders and end-users.

The Head Campus SZABIST Larkana Dr. Zahida Abro underlined the importance of active and effective participation of women in the Education Sector and demanded immediate steps in this regard.

Secretary IBCC Dr. Ghulam Ali Mallah talked about uniformity in assessment and discouraging rote learning at the intermediate level through learning from best practices and enhancing the capacity of intermediate boards.

The Central President Federation of All Pakistan Universities Academic Staff Association Dr. Sohail Yousaf suggested that a new Education Policy should incorporate protecting the autonomy of the universities, academic freedom, and sufficient funding to the universities.

The panel discussion was organized by the Superior University, the Association of Private Sector Universities Pakistan (APSUP), the Inter-University Consortium for Promotion of Social Sciences Pakistan (IUCPSS), the University of Lahore, and the Government College University Lahore.

Mati
Mati-Ullah is the Online Editor For DND. He is the real man to handle the team around the Country and get news from them and provide to you instantly.
Share
Facebook
Twitter
Pinterest
WhatsApp
Previous articleSpecial Search and Rescue Mission to fly to K-2 for missing Climbers
Next articleDaraz and Extreme Commerce join hands to empower local sellers through E-Commerce education