Pakistan’s ties with China are bedrock of its foreign policy: Ayaz Sadiq

Taking to the outgoing Chinese ambassador to Pakistan Sun Weidong who paid a farewell call on him at Parliament House in Islamabad, the Speaker said Pakistan and China were committed to an all-encompassing and enduring partnership to support each other at international and regional forums.

“Pak-China strategic partnership is highly essential for peace and development in the region and beyond,” he remarked. 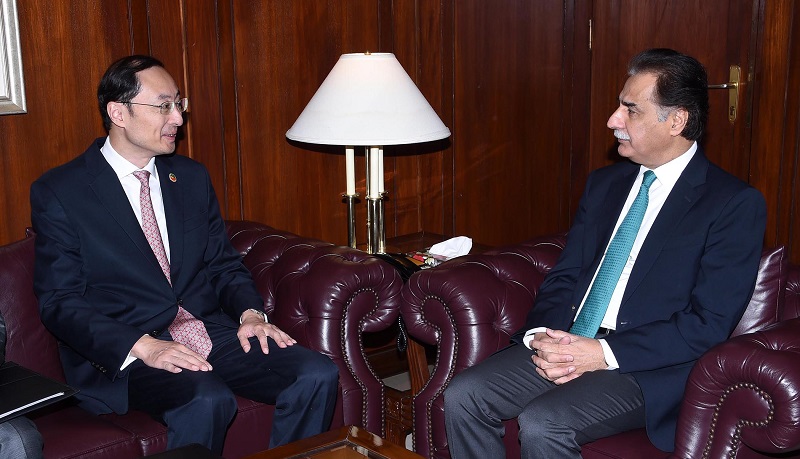 Referring to China Pakistan Economic Corridor (CPEC) as game-changer project for the regional development, the Speaker said the realization of CPEC was manifestation of shared dream of unprecedented prosperity for our region.

While eulogizing the services of the Chinese ambassador Sun Weidong for promoting Pak-China Friendship, the Speaker said Sun Weidong played a special role to build a bridge between the two neighboring Countries to new heights during his stay in Pakistan.

The Speaker National Assembly acknowledged that the time tested and infinite relationship between two Countries was based on the firm foundations of mutual respect, trust, peaceful co-existence and brotherly neighborhood. It indeed goes to the credit of the visionary leaderships of the two countries, he added.

Ayaz Sadiq also recognized the kind support of Sun Weidong for Green Parliament Project and for all of his devoted efforts in promoting closer ties between China and Pakistan.

Speaking on the occasion, the Chinese ambassador narrated historical facts of the Pak-China relations, and said these relations were durable, time tested and beyond the effects of politics and economics.

The Chinese envoy said both China and Pakistan would continue supporting each other on international and regional issues, and their friendship would grow stronger with the passage of time.

Sun Weidong expressed his gratitude to Speaker for his views, and said during his stay in Pakistan, he had found Pakistanis friendly, peace-loving and resilient who have withstood the test of time.

The ambassador assured the Speaker that he would keep on portraying true image of Pakistan during his next diplomatic assignment.

Mati
Mati-Ullah is the Online Editor For DND. He is the real man to handle the team around the Country and get news from them and provide to you instantly.
Share
Facebook
Twitter
Pinterest
WhatsApp
Previous articleShahbaz Sharif lambasts opponents for accusing him of corruption
Next articleMamnoon stresses upon welfare of humanity, brotherhood as Muharram begins