Pakistan’s support critical to success of US strategy for Afghanistan: Alice Wells

ISLAMABAD, Pakistan: The US Acting Assistant Secretary of State Ambassador Alice Wells on Monday said as an immediate neighbor and important Country of the region, Pakistan’s support was critical to the success of the US strategy for Afghanistan.

In a meeting with the Foreign Secretary Tehmina Janjua at the Foreign Office in Islamabad, the ambassador noted the importance of the longstanding bilateral relationship, and acknowledged Pakistan’s efforts in eradicating terrorism and conveyed the US desire to work with Pakistan in furthering the shared objectives of stabilizing Afghanistan.

Alice Wells underlined the need for strengthening intelligence cooperation between Pakistan and the United States to improve coordination in counter-terrorism efforts.

Tehmina Janjua underscored that the relationship with the United States needed to move forward under an environment of mutual trust and respect. 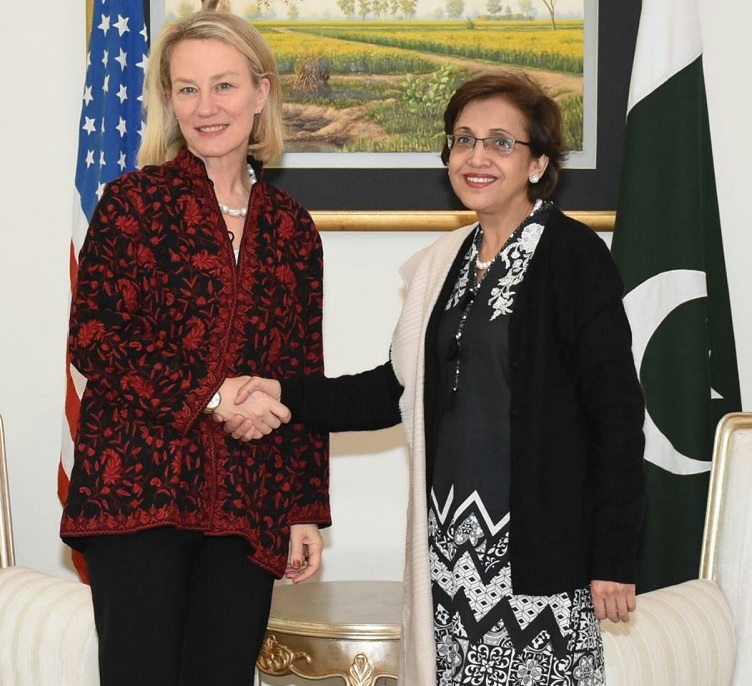 In the context of the regional situation, the foreign secretary expressed concerns on the continued use of Afghan soil by elements hostile to Pakistan’s stability. She added that strengthening border management mechanisms between Pakistan and Afghanistan was vital to addressing concerns relating to cross border movements.

Early repatriation of Afghan refugees was also important for improving relations with Afghanistan, she emphasized. She reaffirmed Pakistan’s commitment to continue its efforts for promoting peace and stability in the region.

The foreign secretary drew the attention of the US delegation to the recent irresponsible statement by the Indian Army Chief and the pattern of escalation by India on the Line of Control (LoC) and the Working Boundary and condemned Indian mortar attacks on Pakistani posts resulting in the martyrdom of Pakistani soldiers last night. She asked the US side to advise restraint to India and stop its escalation tactics.

During the meeting, the two sides agreed that all initiatives owned and led by the Afghans for seeking a peaceful solution should be supported by the regional countries. Pakistan’s positive role in several peace initiatives was appreciated.

Senior officials from the US National Security Council and the US ambassador to Pakistan David Hale were also present in the meeting.

The visit of US Acting Assistant Secretary of State Ambassador Alice Wells was part of regular engagement between the two Countries on bilateral and regional cooperation.

Mati
Mati-Ullah is the Online Editor For DND. He is the real man to handle the team around the Country and get news from them and provide to you instantly.
Share
Facebook
Twitter
Pinterest
WhatsApp
Previous articleFederal Board to introduce E-Marking System to ensure transparency in Paper Checking
Next articleNA passed five bills on women, children and minorities in 2017