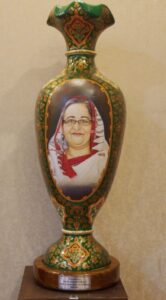 DHAKA, Bangladesh: Pakistan’s High Commissioner in Dhaka Imran Ahmed Siddiqui held a meeting with the Prime Minister of the People’s Republic of Bangladesh Sheikh Hasina on Thursday in a very cordial environment.

The Bangladesh prime minister welcomed the High Commissioner and assured him of her full support in the discharge of his official duties.

The High Commissioner conveyed the message of goodwill and friendship from Prime Minister Imran Khan to the Bangladesh prime minister which she reciprocated with her greetings and good wishes for the leadership of Pakistan.

Imran Ahmed Siddiqui informed Prime Minister Sheikh Hasina that the government and the people of Pakistan held the Bangladeshi leadership and people in high esteem and affection.

In the meeting, the two sides agreed to further strengthen the existing fraternal relations between Pakistan and Bangladesh.

Mati
Mati-Ullah is the Online Editor For DND. He is the real man to handle the team around the Country and get news from them and provide to you instantly.
Share
Facebook
Twitter
Pinterest
WhatsApp
Previous articlePakistan condemns assassination of Iranian scientist Mohsen Fakhrizadeh
Next articleChina acknowledges major progress in CPEC infrastructure, energy projects