WINNIPEG, Canada: Pakistan’s High Commissioner to Canada Raza Bashir Tarar has said that the situation in Indian Occupied Kashmir remains extremely grave and the Indian government’s portrayal of normalcy is an eye-wash.

While addressing the Jinnah Award Ceremony organized by the Jinnah Society of North America in Winnipeg City of Canadian Manitoba Province, the High Commissioner said that the Modi government is propelling the extremist “Hindutva” ideology and there are concerted efforts to settle people from outside in order to change demographics of the region, which is a clear violation of the international law.

Raza Bashir Tarar said that Pakistan remains steadfast in stressing that self-determination is an inalienable right of the people of Kashmir.

Paying tribute to the leadership of Quaid-e-Azam Muhammad Ali Jinnah, the High Commissioner said he overcame seemingly insurmountable obstacles to carve out the independent state of Pakistan, where Muslims of the sub-continent could lead their lives according to their own religion and cultural values. At the same time, the Quaid made it clear that minorities in Pakistan would be afforded equal opportunities and protection, he highlighted. 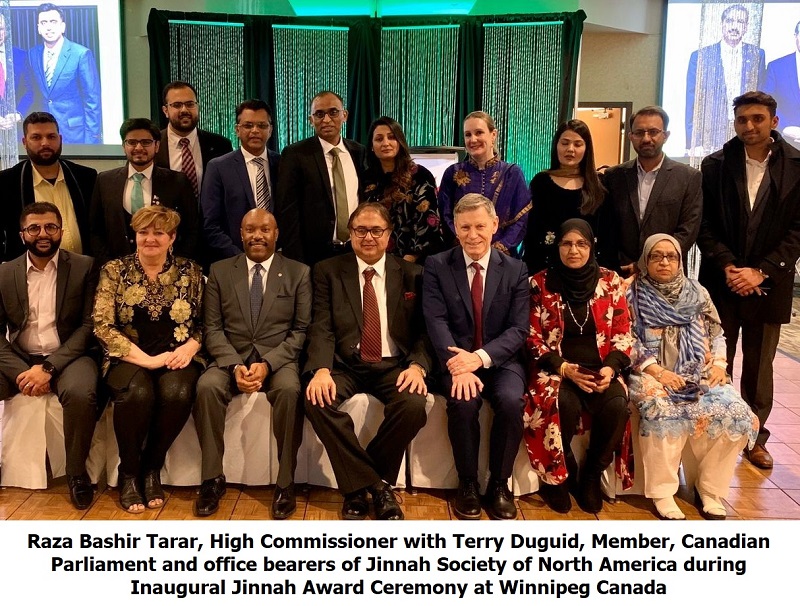 The High Commissioner Tarar informed that the Government of Pakistan led by Prime Minister Imran Khan is focusing on harnessing the potential of our expatriates and taking several initiatives to improve the economy of the Country. He said that the political leadership of Pakistan is focused on strengthening governance; accountability and transparency; and is striving hard to achieve poverty alleviation.

“The Government is also very serious to improve tourism industry in the country, a great potential which has not been fully exploited so far and religious tourism is being given great attention”, he added.

While referring to the inauguration of the Kartarpur Corridor, he said that it is a very positive and commendable development to promote inter-religious harmony and a large number of Canadian Sikhs attended the ceremonies.

The High Commissioner expressed the confidence that Community will continue to introduce our rich and diverse cultural values to Canadians and to promote mutual understanding and goodwill.

“Over half a million Canadians of Pakistani origin are a strong bridge between the two countries and can play a pivotal role in further cementing the existing bonds of friendship, economic interaction, trade and development cooperation including in health and education sectors”, he concluded.

In their separate meeting with the High Commissioner, they discussed issues of mutual interest to both the countries and expressed the desire to further enhance cooperation during the new Liberal Government in Canada.

They presented an award to the High Commissioner for the Prime Minister of Pakistan for his dedication towards religious minorities.

Mati
Mati-Ullah is the Online Editor For DND. He is the real man to handle the team around the Country and get news from them and provide to you instantly.
Share
Facebook
Twitter
Pinterest
WhatsApp
Previous articleList of Top 10 Richest Pakistani Men in 2020
Next articleHow Air Pollution Impacts Our Mental Health and Behaviors