ISLAMABAD, Pakistan: Around 20 youth entrepreneurs from Pakistan and Afghanistan belonging to various fields came together in the federal capital under a well-conceived plan to boost business cooperation between the two neighboring countries.

The entrepreneurs gathered here on Thursday in a conference with business mentors in the field of the digital economy and information technology to highlight an alternative in the form of the digital space for continuing businesses which can bypass most of the logistical, bureaucratic, and administrative hurdles that are conventionally faced by the business community in both countries.

The conference was organized by the Center for Research and Security Studies (CRSS) as part of its ongoing Pak-Afghan Trade and Economic Connectivity initiative since 2017 aimed to improve business cooperation and explore ways of developing partnerships and joint ventures. 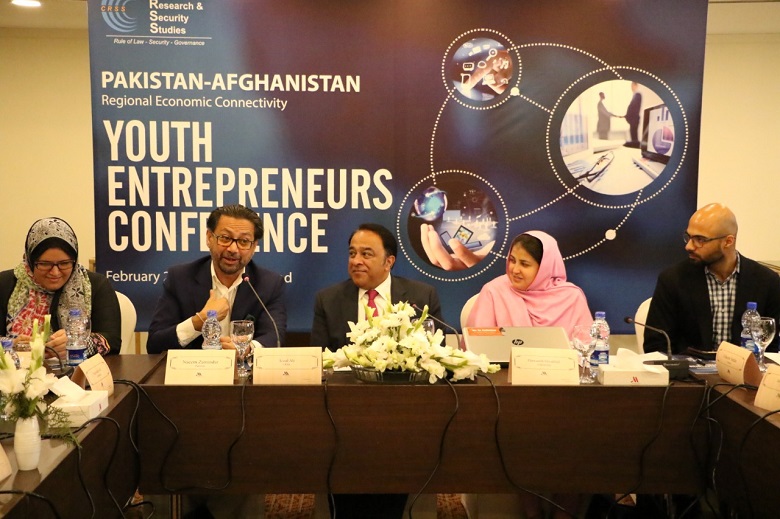 Due to a lack of communication between the two governments, political upheaval in Afghanistan that does not allow the private sector to develop freely, bilateral trust deficit and negative perceptions, and issues faced by businessmen in transit trade, business opportunities between Pakistan and Afghanistan have fairly suffered. As a result of the limited contact between the two governments, particularly, Naqibullah Safi, Executive Director, PAJCCI, Afghanistan, stated.

He said that there is also a lack of awareness of the new trade policies and regulations that are emerging on both sides as well. Further, the negative role played by the media and issues in visa issuance, have also affected the prospects of joint collaborations or investments that the two countries can greatly benefit from, he added.

Naeem Zamindar, former Chairman, Board of Investment (BoI), Pakistan, advised the youth entrepreneurs of both sides to build positive people to people connections and urged them to explore micro-entrepreneurship.

He stated that no idea is small; however, what is required are will power, persistence, and trusting one’s journey. He urged both sides to come together and work together for joint business collaborations.

Certified Business Mentor and Director at Alishverish Enterprises, Ms. Fatima Anila, stated that the issue with Pakistan and Afghanistan is of trust deficit. However, the youth of the two countries need to work together to overcome this deficit and explore the opportunities that are in abundance for the economic development of both countries and for improving the bilateral relations. She further stated that there is a difference between an entrepreneur and a businessman; a businessman is always talking about the problems that he is facing while an entrepreneur will think of a solution. Similarly, while there are many issues in Pakistan and Afghanistan, but how many entrepreneurs have jumped-in to solve the problems and work jointly? “Yesterday was good, but today is good to do it too,” she said.

Anila urged the entrepreneurs of Pakistan, Afghanistan, and Iran, which all have an immense source of renewable energy, also to collaborate their efforts in building partnerships in this field and other potential areas of regional economic development.

Ms. Parwarish Oryakhail, Vice President of Afghanistan Women Chamber of Commerce and Industry (AWCCI), shared the challenges that the Afghan businesswomen faced in establishing the AWCCI. She invited the youth entrepreneurs to consider focusing on Small and Medium Enterprises (SMEs), stating that these create most jobs and can be expanded with resilience and perseverance. For example, Afghan women in the manufacturing and handicraft businesses, she said, have created the most employment opportunities for both men and women. She hoped that the relationship between the two countries would improve so that entrepreneurs on both sides would build positive partnerships.

Afsheen Zeeshan, Senior Vice President of Islamabad Women Chamber of Commerce and Industry (IWCCI), stated that it was an excellent conference to bring youth entrepreneurs – both males and females – on both sides together to improve the relations between the two countries. She extended IWCCI’s support in providing training and all required facilities to the Afghan women in business and for creating business collaborations between the two countries’ women entrepreneurs.

She stated that the two countries have much in common, while also being bordering neighbors, and, thus, would gain greatly from joining hands and synergizing their efforts.

At the request of IWCCI’s Vice President, the Vice President of AWCCI agreed to sign a Memorandum of Understanding between the two chambers to cooperate in women-led businesses across borders and in supporting each other. They agreed to share the draft of the MoU in the next couple of days and will sign it in the first week of March.

Further, the Secretary General of Pakistan-Afghanistan Joint Chamber of Commerce & Industry (PAJCCI), Faiza Zubair, introduced the digital business portal for Pakistan and Afghanistan that PAJCCI launched last month. The purpose of such a digital portal is to promote business opportunities between Pakistan and Afghanistan where business ideas can be advertised with a call for joint partnerships and investments. The portal will also be a directory of business-related publications from both countries’ think tanks, civil society organizations as well as government departments, which entrepreneurs can read for emerging developments in the business sectors of both countries. In addition, the portal will also carry daily updates of relevant events, news, and a tracker of companies’ businesses’ progress as well as opportunities. Ms. Faiza affirmed that the portal would prove to be very useful for the young entrepreneurs of both countries and was hopeful that it would pave the way for many partnerships in the field of digital economy, particularly.

Officials from Pakistan’s National Incubation Center (NIC) were also present at the conference that introduced the activities of the Center with the Afghan and Pakistani youth entrepreneurs and provided mentorship in the brainstorming and business-plans devising session to the young participants.

The conference also inaugurated the formation of a Pak-Afghan Youth Entrepreneurs Caucus which would hold follow-up meetings over the next year to monitor the progress of joint ventures between the two countries’ youth entrepreneurs.