The demand was raised when the Head of Pakistan Women Journalists Association and former Joint Secretary of NPC Fauzia Kulsoom Rana met the Federal Minister for Information and Broadcasting Chaudhry Fawad Hussain along with a five-member delegation of video journalists in Islamabad on Friday.

Talking to the minister, Fauzia Kulsoom Rana said that journalists, who are the most conscious section of the society, have their reservations on the transparency and freedom of elections of their respective Unions including the NPC. 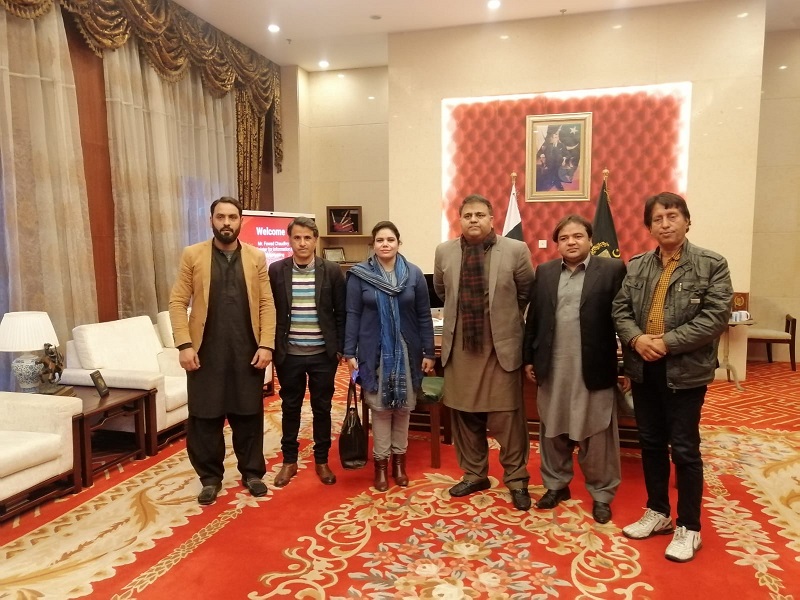 The minister was apprised that photo and video journalists and producers of electronic media working in news and current affairs are considered as journalists all over the world.

The federal minister said that the government was amending the Protection of Journalists and Media Professionals Bill 2021 on an emergency basis to re-introduce them in the category of journalists.

Fauzia Rana said that this is the era of electronic media and information technology, and journalism is heavily dependent on digital devices so the future belongs to digital journalism.

The WJA Chief demanded that all candidates contesting the National Press Club elections should declare their assets and file tax returns.

Fauzia Rana said that influential political leaders like Pakistan Muslim League-Nawaz’s (PML-N) Maryam Nawaz and Pervez Rashid, who are using journalists as a tool for their political agenda and on the other hand are hurting their self-esteem, should be held accountable.

The alleged audio leaks are reprehensible which has caused a wave of concern among working journalists, she added.

The WJA Chief added that if Maryam Nawaz wanted to run the Pakistani media in the style of PML-N’s media cell with the intention of carrying out her anti-state rhetoric, it was now impossible.

Fauzia Kulsoom Rana said that those, who were chanting mantras of freedom of journalism, were themselves the biggest weapons to stifle the press and media. She said that it was time to end the monopoly of the group with vested interests, which is occupying high positions in the NPC by using corruption and blackmail as their tools.

The delegation also briefed the information minister about the difficult conditions under which cameramen perform their duties.

The information minister assured of amendments in the Protection of Journalists and Media Professionals Bill 2021 besides providing Health Cards facility to journalists.

Fauzia Kulsoom Rana said that photojournalists, video journalists, and producers of news and current affairs departments of various media houses are playing a key role in the media and no group can usurp their rights.