While talking to Speaker of Islamic Consultative Assembly of the Islamic Republic of Iran Dr. Ali Ardeshir Larijani who met him during the sideline meeting of the Speakers’ Conference held in Islamabad, Ayaz Sadiq remarked both the nations were intertwined in bonds of religion, history, culture and their goals, friends and enemies are also identical. 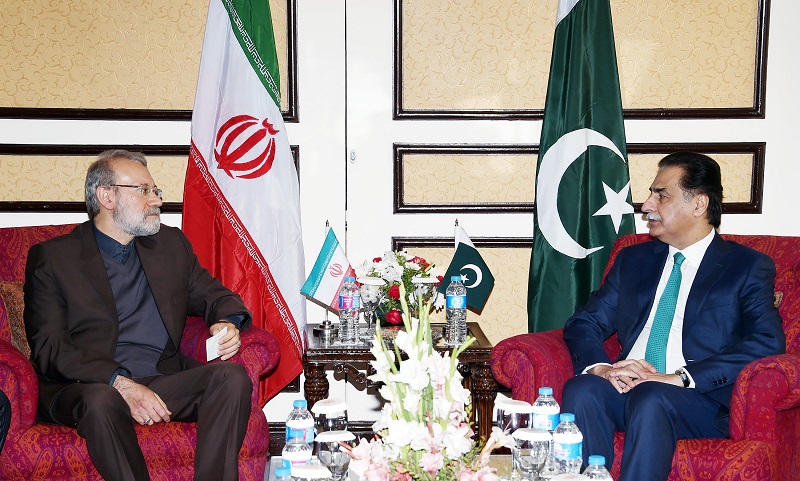 Stressing the need for enhanced parliamentary relations between both the countries the Speaker said that regular interaction between the parliamentarians of both countries could play an important role for promoting unity and stability in the region.

The Speaker said Pakistan and Iran share views on the importance of the establishment of peace and security in the region and reinforcement of unity.

He stressed that the regional issues should be resolved by the neighbouring countries by taking their own initiatives.

He underlined the need for further enhancing cooperation between both countries in diverse fields. He thanked Iranian Speaker for accepting his invitation of participation in the Speakers’ Conference.

The Speaker National Assembly said that the unity among the Muslim Countries was necessary to confront the challenges being faced by Ummah.

Speaker of Islamic Consultative Assembly of the Islamic Republic of Iran, Dr. Ali Ardeshir Larijani said that his country also considered Pakistan as one of its brothers and wants to further strengthen the existing bilateral relations through enhancing cooperation in diverse fields.

He said ties between Pakistan and Iran were unbreakable and both the nations have always stood with each other in difficult conditions.

He also expressed the hope that the Conference will play an instrumental role to promote connectivity amongst the member states and address the challenge of terrorism which is a constant threat to peace and security of the region.

He expressed the gratitude for the warm welcome and hospitality extended to him and his delegation during their stay in Pakistan.

Dr. Ali Ardeshir Larijani has also extended invitation to Speaker National Assembly Sardar Ayaz Sadiq for participation in meeting of Parliamentary Union of the OIC Member States which will be held in Tehran next year.