Pakistan wants peace with India but not at expense of Kashmiris: FM Qureshi

ISLAMABAD, Pakistan: The Foreign Minister Shah Mahmood Qureshi has said that Pakistan wants peace with India but not at the expense of the Kashmiris, hoping that India would demonstrate statesmanship to politically resolve the festering Kashmir dispute.

In his address at a Seminar titled “Indian Transgressions in IIOJ&K: Post 5th August 2019 Developments & Future Prospects” organized by the Islamabad Policy Research Institute (IPRI) in Islamabad on Wednesday, the foreign minister again urged the international community to continue to exhort India to treat Kashmiris like human beings. 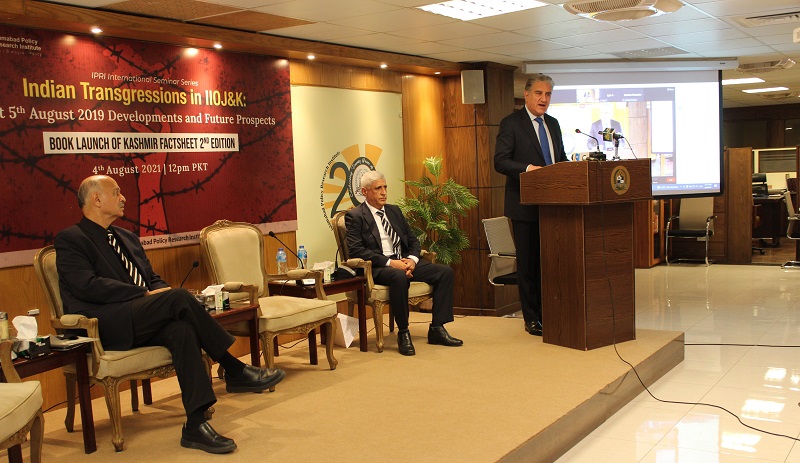 The following is the transcript of his remarks at the Seminar;

On 5th August 2019, India in a state of power drunkenness embarked upon a Hitlerian final solution for the Indian Illegally Occupied Jammu & Kashmir.

The resolutions of the United Nations Security Council at which India covets a permanent seat, were cast aside and no tool of cruelty was deemed excessive by the world’s “largest democracy”!

Two years on, the Kashmiris continue to languish in the largest concentration camp on the planet.

On top of that, they are being held incommunicado. They do not have access to regular or even emergency medical facilities – a plight not shared even by the worst criminals.

Even COVID-19, which has generated unprecedented empathy in the human race has done nothing to bring even an iota of relief to the Kashmiris.

But it gets worst: India is trying to eliminate Kashmiris altogether.

Young men disappearing without a trace.

New domicile rules and land laws have been thrust upon the Kashmiris to reengineer IIOJK’s demography.

In its delusion of grandeur, India expected the world and more pertinently Pakistan, to acquiesce.

But Ladies and Gentlemen, Pakistan, guided by the clarity of Prime Minister Imran Khan’s vision, stood its ground.

Under the Prime Minister’s directions, I have had the honour to focus the Foreign Ministry’s efforts on rousing the international community.

I am happy to note that our efforts have not been in vain.

The Security Council has discussed the Jammu & Kashmir dispute thrice since August 2019.

World leaders, Parliamentarians, media, humanists and civil society at large have understood that beyond the smokescreen of Indian sophistry, lies Kashmiris’ perpetual nightmare.

So, ladies and gentlemen, the question is: What do we do?

The Government of Pakistan is absolutely clear that we will continue to lend moral, political and diplomatic support to Kashmiris.

Accordingly, insinuations or allegations questioning our sincerity are simply malicious.

As for the international community, it must continue to exhort India to treat Kashmiris like human beings.

India should rescind its unilateral actions and all related instruments of oppressions and state terrorism.

It must respect UNSC’s resolutions and let the Kashmiris exercise their right to self-determination.

This, ladies and gentlemen, will pull out the dagger which rankles in the heart of bilateral and regional peace and bodes ill for international peace and security.

It will unlock the potential of South Asia.

Pakistan wants to shift focus from geo-politics to geo-economics. We want peace with India but not at the expense of the Kashmiris.

We hope Indian leadership will prefer statesmanship over populism. We hope we can, together, weaken the extremist narrative through a genuine pacific settlement of a festering dispute.

Rest assured, the Imran Khan government will not be found wanting.

I thank you all very much.”