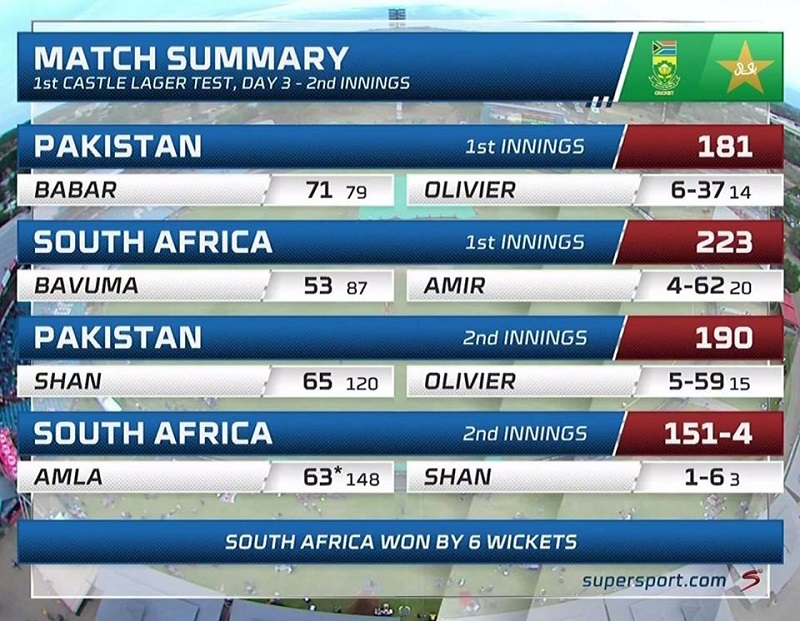 The following story was posted prior to the resumption of first Test between Pakistan and South Africa at Centurion on Match’s Third Day.

An uphill task has again been assigned to Pakistani bowlers to restrict South Africa within 148 runs to win the first Test at Centurion as the match enters third day on Friday.

The situation could have been much favorable if Pakistani middle order and tail-enders batted more sensibly and endeavored to build partnerships. At one stage it was 101 for 1 but a subsequent collapse ended Pakistan’s second innings on just 190 runs.

Having secured a 42-run lead against Pakistan after first innings, South Africa now requires 149 runs with 10 wickets in hand to take a 1-0 lead in the three-match Test series.

Shan Masood also displayed brilliance with the bat and scored 65 runs. However, rest of the players performed miserably and ruined the efforts of bowlers and the top order.

Pakistan captains to score 2 ducks in a Test

South Africa’s Duanne Olivier grabbed the second five-wicket haul in the second innings and overall took 11 wickets in the match.

Though already it looks, not impossible, but difficult to turn the tide in its favour but history doesn’t reflect good signs for Pakistan.

Not only Pakistan has never won a Test match previously at Centurion but South Africa hasn’t also lost a Test match ever while chasing a target below 150.

In addition, South Africa has only lost two out of 23 Tests it has played at Centurion.

Mati
Mati-Ullah is the Online Editor For DND. He is the real man to handle the team around the Country and get news from them and provide to you instantly.
Share
Facebook
Twitter
Pinterest
WhatsApp
Previous articleJazz partners with Sehat Kahani to Digitize Medical Consultations
Next articleThree killed in Okara as dense fog causes vehicles collision