Yasir Shah and Hasan Ali have put Pakistan into the verge of a victory in the first Test match against New Zealand at Abu Dhabi (PTV Sports).

Pakistan now requires just 139 more runs to win the match with 10 wickets in hand and take a lead in the three-match Test series. If Pakistan succeeds to do so, it will be its 25th Test victory against New Zealand.

New Zealand had at one stage strengthened its position in the match after Henry Nicholls and BJ Watling built a 112-run partnership for the fifth wicket. But as they returned to the pavilion, rest of New Zealand’s batting lineup stumbled quickly. Except Ish Sodhi, none of New Zealand’s late order batsmen demonstrated any resistance to Pakistani bowlers.

The entire New Zealand’s batting line was bowled out for 249 runs, setting a total of 176 runs for Pakistan to chase down. 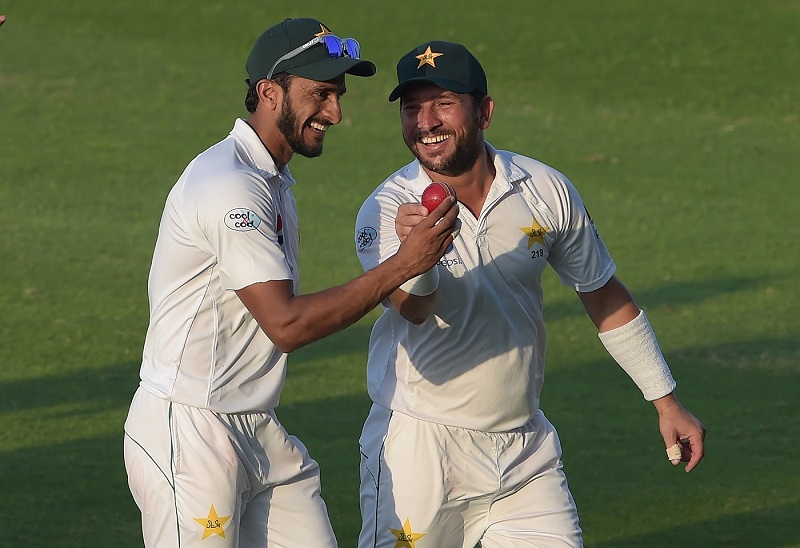 In the second innings, both Pakistani openers played sensibly and didn’t lose their wickets. At stumps on day three, Pakistan was on 37 for 0 with Imam Ul Haq and Mohammad Hafeez at the crease on 25 and 8 runs respectively.

Since Pakistan had a lead of 74 runs over New Zealand after the first innings; therefore, its batsmen just need to score further 139 runs to take a lead in the series.

First time in 14 years that two Pakistan bowlers have taken a 5-for in an innings – Hasan Ali and Yasir Shah today. Last time it was Shoaib Akhtar and Danish Kaneria at MCG in 2004. #PakvNZ

Earlier in the first innings, New Zealand scored just 153 runs while in reply, Pakistan put a total of 227 on the board.

With 8 wickets in both innings, Yasir Shah is so far the leading wicket taker in the match followed by Hasan Ali with 7 wickets. Mohammad Abbas though picked up 2 wickets in the first innings but he remained wicketless in the second innings which occurred for the first time since he made his Test debut against West Indies in April 2017.

Mati
Mati-Ullah is the Online Editor For DND. He is the real man to handle the team around the Country and get news from them and provide to you instantly.
Share
Facebook
Twitter
Pinterest
WhatsApp
Previous articleCongress of NACO to be held in Sofia on June 13-14
Next articleLive Telecast of annual all Pakistan Naat Competition at Radio Pakistan