The two arch-rivals Pakistan and India will meet at the Melbourne Cricket Ground (MCG) on Sunday in a Group 1 Match of Super 12 in ICC Men’s T20 World Cup 2022.

Along with Pakistan and India, South Africa, Bangladesh, Zimbabwe and Netherlands are also part of Group 2.

It would be the first match of Group 2 after the commencement of Super 12 Round.

For Pakistan vs India Live Streaming T20 World Cup 2022 Super 12, go to the below link; 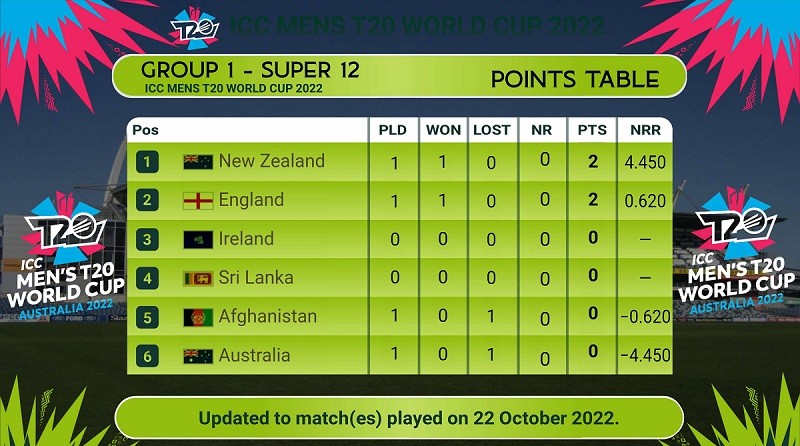 In Sydney, Australia won the toss and asked New Zealand to bat first.

The Kiwis had a blistering start as Finn Allen struck 42 runs off just 16 balls before he was bowled by Josh Hazlewood.

After the 56-run opening partnership, Devon Conway along with Kane Williamson established another 69 runs partnership.

On his individual score of 23, Kane Williamson was given leg-before wicket off Adam Zampa.

The following batsman Glenn Phillips failed to accelerate his innings and got out on 12.

In the end, Devon Conway and James Neesham remained unbeaten on 92 and 26 respectively.

New Zealand’s batting ended on 200 for 3 in stipulated 20 overs.

From Australia, Josh Hazlewood took 2 wickets while Adam Zampa got 1.

Eventually, the entire team was bowled out for 111 in 17.1 overs, falling short of 89 runs. Glenn Maxwell with 28 runs remained the top scorer for his side.

Tim Southee was the pick of the bowlers as he picked up 3 wickets by conceding just 6 runs. Mitchell Santner also took 3 wickets and Trent Boult bagged 2.

One wicket each went to Lockie Ferguson and Ish Sodhi.

Later in another match, England sealed a convincing victory against Afghanistan at Perth.

Batting first, Afghanistan was bowled out for 112 runs. The damage was done by Sam Curran who grabbed 5 wickets and conceded merely 10 runs.

Ben Stokes and Mark Wood also got 2 wickets each and 1 was taken by Chris Woakes.

England reached the target in 18.1 overs with 5 wickets still remaining.

A winning start for England in the Super 12 💪🏻#T20WorldCup | #ENGvAFG pic.twitter.com/sqy9tllXQv

Cricket lovers can watch the high-voltage match of arch-rivals Pak and India on the following channels:

Whereas, cricket fans can watch Pak Vs India match on the following apps/links:

How to watch the live streaming of PAK vs IND T20 World Cup?

In the UK, New Zealand

In the Middle East

In UAE, OSN Sports Cricket will present the live telecast of the matches.