Pakistan will take on England in the second Test of three-match series as part of the ICC World Test Championship at the Ageas Bowl in Southampton, beginning from August 13.

For the second Test, both teams are likely to make some replacements.

In the absence of Ben Stokes who is now out of the series for family commitments, England may include fast bowler Mark Wood and right-hand batsman Zak Crawley in the playing XI.

On the other hand, long-neglected left-hand batsman Fawad Alam may feature in the second Test as a replacement of Shadab Khan. While Sohail Khan will also reportedly replace Naseem Shah. 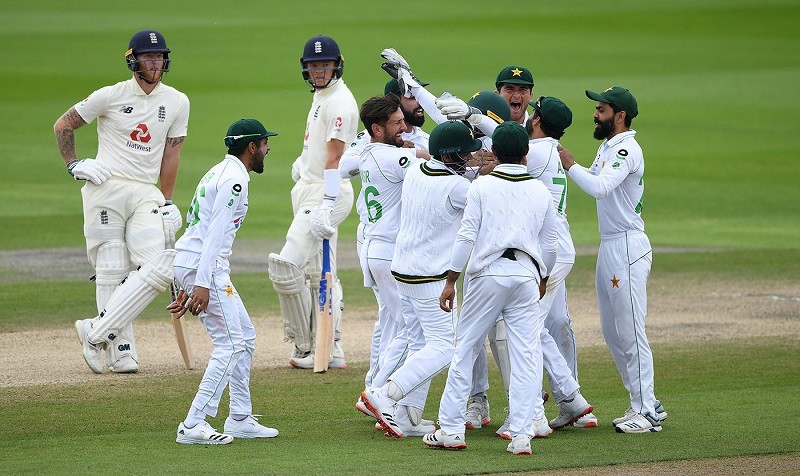 In the first Test at Manchester, Pakistan was deemed as favourites to win the match after it acquired a 107-run lead following the first innings of both sides.

However, a batting collapse in the second innings as the entire team was bowled out for just 169 runs and then inability to break the Jos Buttler and Chris Woakes’ 139-run partnership caused Pakistan the match.

In the second innings while pursuing the target of 277 runs, England had lost five of their top batsmen for 117.

But by making tactical mistakes in the bowling and captaincy blunders from Azhar Ali, the team plunged itself in hot water as they eventually lost the match by 3 wickets.

Since 1954 till date, Pakistan and England have played 84 Test matches against each other. Of them, Pakistan won 21 Tests and lost 26 while 37 Test matches between them ended in draw.

If England wins the second Test match at Southampton and seals the series, it would be their home series victory against Pakistan after 2010.

In between, Pakistan toured England in 2016 and 2018 for a four-match and two-match Test series respectively but both of them were drawn.

Mati
Mati-Ullah is the Online Editor For DND. He is the real man to handle the team around the Country and get news from them and provide to you instantly.
Share
Facebook
Twitter
Pinterest
WhatsApp
Previous articleNazia Hassan, Queen of Pop Remembered on Her 20th Death Anniversary
Next articlePrime Minister Imran Khan inaugurates Peshawar BRT