ISLAMABAD, Pakistan: The Foreign Minister Shah Mahmood Qureshi has asked the International Community to impress upon the Afghan leadership to join comprehensive and inclusive talks to find a peaceful political solution of the Afghan conflict.

Holding delegation-level talks with the Saudi Foreign Minister His Highness Prince Faisal bin Farhan Al Saud at the Ministry of Foreign Affairs in Islamabad on Tuesday, Qureshi said that Pakistan desires peace and stability in the region. 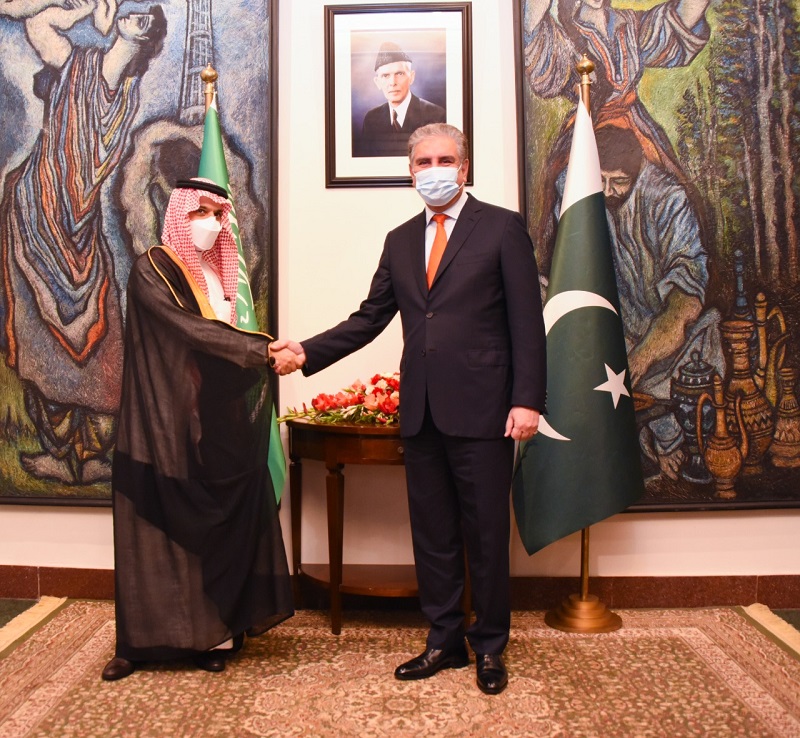 The foreign minister said that Pakistan and Saudi Arabia enjoy cordial and brotherly relations based on common faith, shared history, and cultural affinities.

Shah Mahmood Qureshi said that the two brotherly Countries have always stood by each other in times of trail.

The minister reaffirmed Pakistan’s commitment to continue to extend its support to Saudi Arabia to defend its sovereignty and territorial integrity.

The foreign minister commended Saudi Arabia’s role for the establishment of regional peace especially for resolving the disputes among the Gulf Countries.

In the meeting, the two sides agreed to further improve their economic linkages and expand their bilateral relations in new areas.

Later addressing a Joint News Conference, the Saudi foreign minister said that the establishment of the Saudi-Pakistan Supreme Coordination Council is an important milestone to take the bilateral relationships between the two Countries to new levels and explore new opportunities of cooperation.

The Saudi foreign minister said that both the Countries will encourage their business community to interact more frequently to further strengthen the economic relations.

Alluding to the commonality of views on regional issues, the Saudi foreign minister said that Pakistan and Saudi Arabia have agreed to continue to work together including on Kashmir, Palestine, Afghanistan, and Yemen to facilitate regional peace and stability.

Shah Mahmood Qureshi said that the two sides have made good progress towards the activation of the Saudi-Pakistan Supreme Coordination Council. He said that there will be focal persons in both Countries to oversee progress on this front.

Senior Officials of the Foreign Office received him at Noor Khan Airbase.