ISLAMABAD, Pakistan: Pakistan and Turkey have reiterated their desire to further strengthen and expand bilateral cooperation in all areas of mutual interest, particularly defence.

In a meeting held between President Dr. Arif Alvi and the visiting Turkish Defence Minister General (retd) Hulusi AKAR at Aiwan-e-Sadr in Islamabad on Wednesday, the two sides emphasized the need to work together to overcome the challenges being faced by the Islamic World. 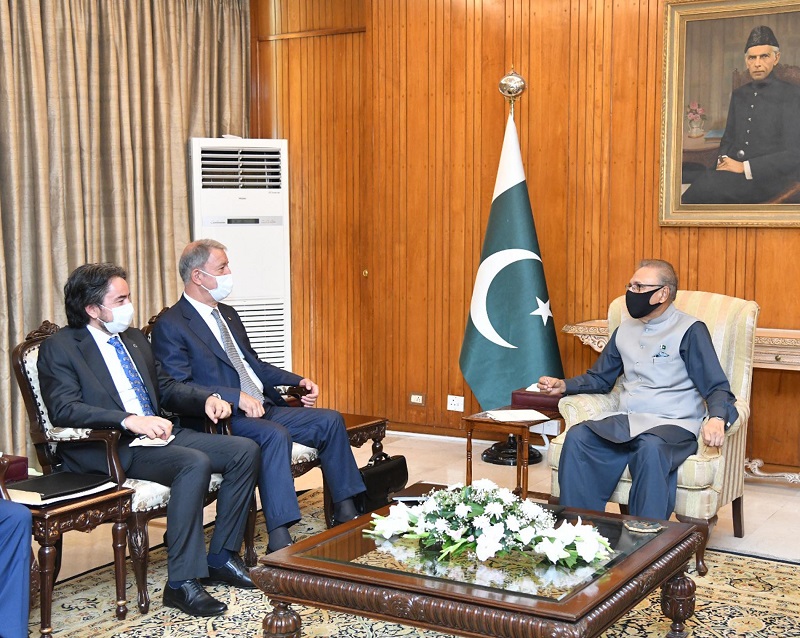 Welcoming the Turkish defence minister, President Arif Alvi said that Pakistan attached great importance to its ties with Turkey as both Countries had a long history of fraternal relations, based on common faith, values and mutual trust.

The president said that Turkey was a brother and great friend which had always supported Pakistan at difficult times. He thanked the Turkish leadership for supporting Pakistan at the international fora on issues of core national interest, such as the Jammu and Kashmir dispute, Financial Action Task Force (FATF), and Nuclear Suppliers Group (NSG)

The president informed that Pakistan was making sincere efforts to promote peace and stability in Afghanistan as Pakistan would be the major beneficiary of peace which had suffered a lot due to prolonged war in the neighbouring Country.

President Arif Alvi also highlighted the human rights violations being committed by India against the Muslim population of the Indian Illegally Occupied Jammu & Kashmir (IIOJK). He urged the International Community to play its role to resolve the Kashmir dispute in accordance with the UN Security Council Resolutions.

The president deeply thanked Turkey for supporting Pakistan’s stance on the Jammu and Kashmir dispute.

The meeting also underlined the need for unity among the Muslim Countries to address the challenge of animosity against Islam.

Hulusi AKAR said that Turkey would continue to support Pakistan on Kashmir.