ISLAMABAD, Pakistan: Pakistan and Turkey have underlined the need for enhanced cooperation in the areas of trade, culture and defence.

In a meeting between President Dr. Arif Alvi and the visiting Chief of the Turkish General Staff General Yasar Guler at Aiwan-e-Sadr in Islamabad on Thursday, both sides reaffirmed the resolve to further improve bilateral ties and support each other at various regional and international fora. 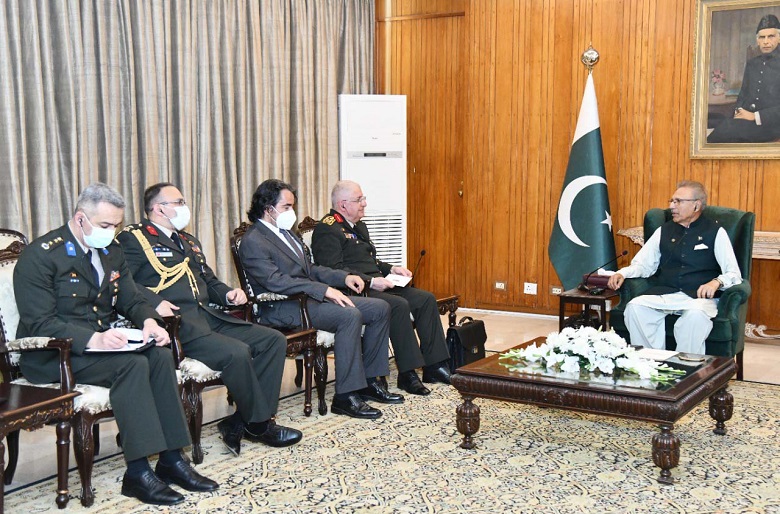 Welcoming the Turkish chief of the general staff, the president said that Pakistan and Turkey enjoyed deep-rooted relations which needed to be further broadened for the mutual benefit of the two Countries.

The president emphasised the need for increasing cooperation in the fields of trade, IT and defence.

President Arif Alvi reiterated that Pakistan would continue to support Turkey on Cyprus.

The president also highlighted the ongoing human rights violations in the Indian Illegally Occupied Jammu and Kashmir (IIOJK) by India and its involvement in the genocide of Muslims. He thanked Turkey for always supporting Pakistan, particularly its stance on the Kashmir dispute.

Discussing the Afghan situation, the meeting emphasised that peace in Afghanistan was very important as it would bring prosperity to its people as well as promote regional trade and connectivity.

Congratulating the president on successfully holding the Pakistan Day Parade, General Yasar Guler said that Turkey would continue to support Pakistan at every platform.

The chief of the general staff underlined the need for further strengthening friendly relations between the two Countries and expressed the hope that the new generations of the two Countries would take forward the bilateral ties to new levels. He also appreciated Pakistan’s efforts in supporting Afghanistan at difficult times.