ISLAMABAD, Pakistan: Pakistan and Turkey have agreed to further solidify and expand bilateral cooperation in the fields of trade and culture.

It was agreed at a meeting between President Dr. Arif Alvi and the visiting Turkish delegation which led by the Turkish Foreign Minister Mevlut Cavusoglu met him at Aiwan-e-Sadr in Islamabad on Wednesday.

Welcoming the delegation, the president said that Pakistan and Turkey enjoyed excellent relations and both Countries needed to further enhance economic and cultural relations for the mutual benefit of the two Countries. 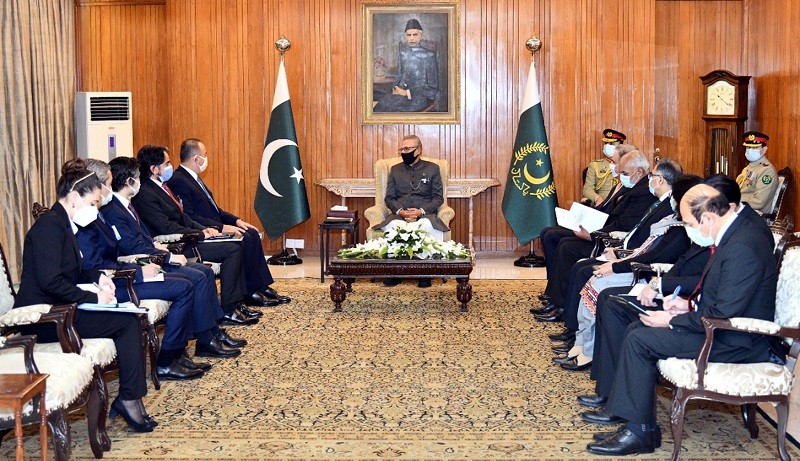 The president informed that Pakistan’s ranking of Ease of Doing Business had tremendously improved and Turkish investors needed to capitalize on investment opportunities in Pakistan. He expressed satisfaction over Turkish investment in Pakistan which had grown over US$ 1 Billion.

President Arif Alvi He asked the Turkish foreign minister to convey his gratitude to President Recep Tayyip Erdogan for raising the voice of Kashmiris during his recent speech at the UN General Assembly.

The president also appreciated Turkey’s leading role in the global efforts to fight the COVID-19 pandemic by providing assistance and support to Pakistan and other countries.

The Turkish foreign minister said that Turkey was keen to improve trade relations with Pakistan. He added that Turkey would continue encouraging Turkish companies to invest in Pakistan.

Mevlut Cavusoglu assured that his Country would continue to support Pakistan at international fora.

Both sides underlined the need to work closely on joint initiatives to combat Islamophobia, hate speech and other manifestations of intolerance towards Islam.

Later, the president conferred the award of Hilal-e-Pakistan on the Turkish foreign minister at a special investiture ceremony in recognition of his services for the promotion of international peace and security as well as Pak-Turkey relations.

Mati
Mati-Ullah is the Online Editor For DND. He is the real man to handle the team around the Country and get news from them and provide to you instantly.
Share
Facebook
Twitter
Pinterest
WhatsApp
Previous articlePakistan, Egypt keen to extend tourism cooperation
Next articlePakistan, Turkey FMs hold extensive talks on wide-ranging issues