Monitoring Desk: “Pakistan traded of sectarian terrorism, drugs, weapons, and radicalization with war dollars coming from the United States and a group of society made its fortune out of Afghan Jihad while injecting a sense in the society that connecting with Afghanistan was a must for our strategic survival”.

This was observed by foreign affairs expert and writer Shazia Anwer Cheema in her latest article titled “Why does Pakistan compromise its own peace for untrustworthy Afghans?” published in daily Pakistan Today.

She indicates that one of the reasons for selling lies to the public that Afghanistan is “strategic depth” was for private, and personal interests who were making fools of the nation and were getting maximum benefits businesses of drugs, smuggling, and war funding.

The writer is of the view poking a nose into Afghan issues and sending a message to the world that Pakistan manages Afghanistan and trying to take credit for the Taliban’s triumph strongly backfired. She believes that such actions of Pakistan have expanded the trust deficit Islamabad had been facing with western capitals for decades and Pakistan’s tendentious show which resulted derisively, in the perilous claim of herding untrustworthy Afghans creating an even bigger void between Pakistan and western countries.

She writes that there is a long history of what Pakistan sacrificed for Afghans, but one must listen to claims of Afghan writers and academicians who are propagating that Pakistan always fought wars on Afghan soil for protecting its own (Pakistan’s) interests and those of foreign entities.


While citing the latest report of Bertelsmann Stiftung for 2022 about Pakistan, she adds report indicates that the state’s monopoly on the use of force is contested by terrorist organizations, sectarian groups, ethnic-nationalist insurgencies, and criminal gangs involved in the smuggling of goods and narcotics and this situation is the ultimate result of Afghan-Soviet Jihad, formation of Afghan Taliban, US-led campaign to dismantled Afghan Taliban and Pakistan participated in all these historic moments as a frontline ally of foreign forces. Offering the land of Afghanistan to Afghan refugees in 1979 was the burden Pakistan society is bearing with terrorism, drugs, weaponization, radicalization and social intolerance commented the writer. 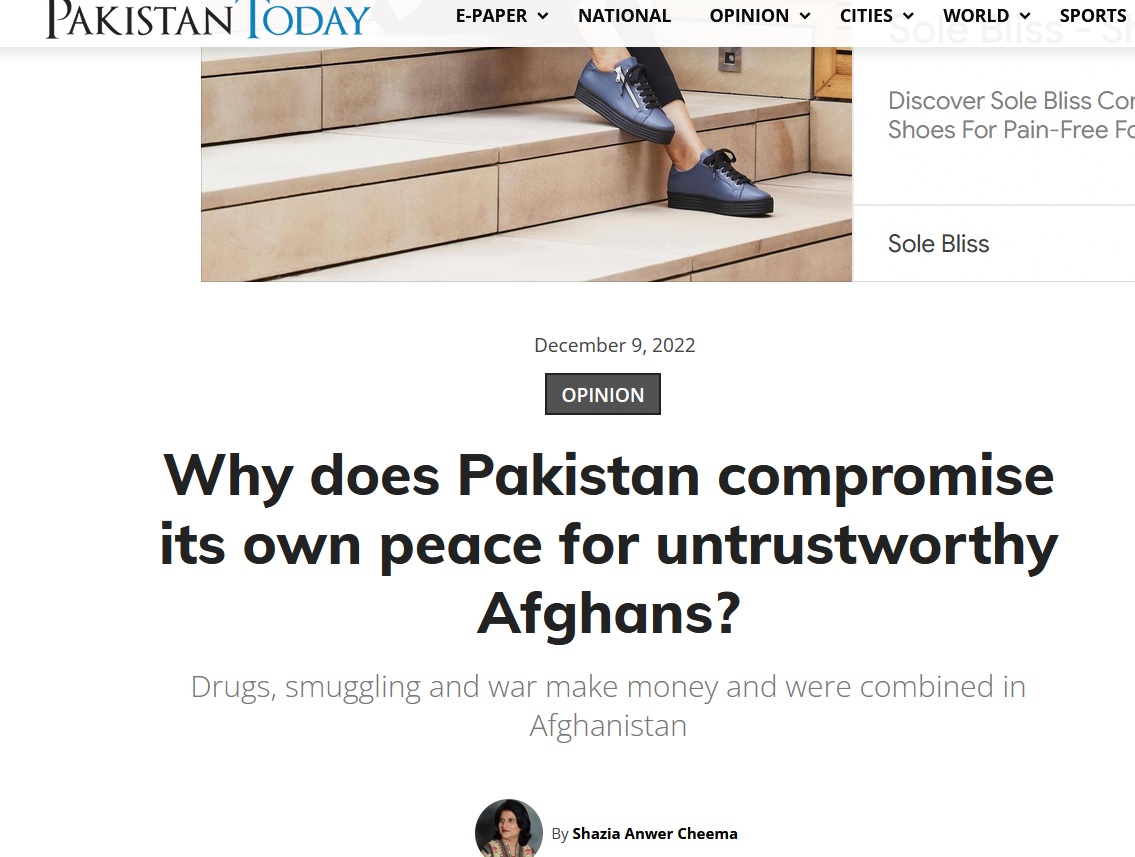 Read her original article at Pakistan Today to click this link