ISLAMABAD, Pakistan: The Foreign Minister Shah Mehmood Qureshi on Friday underlined Pakistan’s Foreign Policy to be followed by the new federal government, and said the Country would realign itself with current global diplomatic demands.

“Pakistan is no longer beloved of the West in the changing international political dynamics,” Qureshi said while briefing the media about the meeting held at the Foreign Office earlier in the day with Prime Minister Imran Khan in the Chair.

Qureshi said the World had changed and they were living in the World of realignments. He said they (Pakistani government) had to understand and gel with today’s World.

Shah Mehmood Qureshi said the World from unipolar was again shifting towards multipolar, adding political and economic power was shifting towards the East. He said rising islamophobia and anti-immigrants sentiments were leading western Countries.

Qureshi said restoration of peace was need of the hour, and all institutions of Pakistan were on the same page. 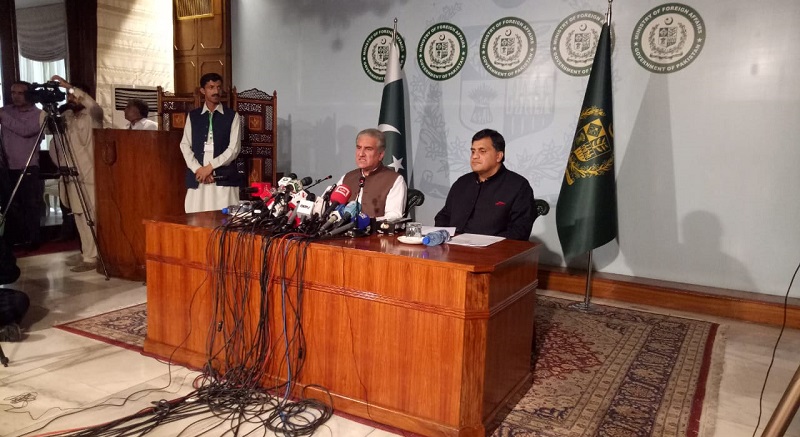 Talking about Indo-Pak relations, he said they had to look how to move forward.

“We are positive that regional peace is possible and we always work for peace in this region.”

The foreign minister also paid gratitude to the Indian Minister of External Affairs Sushma Swaraj who had written a felicitation letter to him.

Shah Mehmood Qureshi said Iran was a neighbor of Pakistan and they needed a peaceful border with Iran.

The foreign minister said China Pakistan Economic Corridor (CPEC) CPEC also came under discussion in today’s briefing. He said Shanghai Cooperation Organisation (SCO) brought opportunities for Pakistan and they had to work on it.

In addition, he said South Asian Association for Regional Cooperation (SAARC) was an important forum but unfortunately the region didn’t get benefit from that.

“We haven’t been able to utilize the SAARC forum properly. We wish SAARC should be activated,” he said.

On Pak-US relations, Qureshi said if they wanted to expand relationship with the United States, they had to understand US demands in Afghanistan. He said the US Secretary of State Mike Pompeo was expected to arrive in Islamabad on September 5 and hold talks with the prime minister.

Qureshi also reiterated the Foreign Spokesman’s stance that the US State Department issued a statement which was contrary to facts about Mike Pompeo’s talks with Prime Minister Imran Khan.

Furthermore, he said they needed to expand exportable commodities to the European Countries. He said they should tap European markets to a maximum extent.

“No talks about terrorists network ever took place during Mike Pompeo phone call,” he said.

The foreign minister said Overseas Pakistanis would be asked to lobby for Pakistan in their private and personal capacities.

Qureshi said the Foreign Office was the first defence line of Pakistan, and the prime minister desired to make it further strengthened and more effective.

The minister said narrative building image building would be enhanced for Pakistan. “We will utilize domestic media for soft image of Pakistan,” he said.

Shah Mehmood Qureshi said as per the austerity drive, it was decided in today’s meeting that he wouldn’t stay in five stars hotels on foreign tours; rather he would reside in Pakistan Embassies and travel through business class. He said the number of Pakistan’s delegations for foreign countries would be curtailed.

Mati
Mati-Ullah is the Online Editor For DND. He is the real man to handle the team around the Country and get news from them and provide to you instantly.
Share
Facebook
Twitter
Pinterest
WhatsApp
Previous articleCoke Studio Season 11 Episode 3 first Track “Roye Roye” by Momina Mustehsan & Sahir Ali Bagga
Next articleNation to pay tribute to its Martyrs, their families on September 6: DG ISPR