ISLAMABAD, Pakistan: Pakistan and Tajikistan have agreed to further deepen their relations in diverse fields with a special focus on promoting trade and economic linkages.

The understanding came at a meeting between Prime Minister Imran Khan and Tajik President Emomali Rahmon in Islamabad on Wednesday. 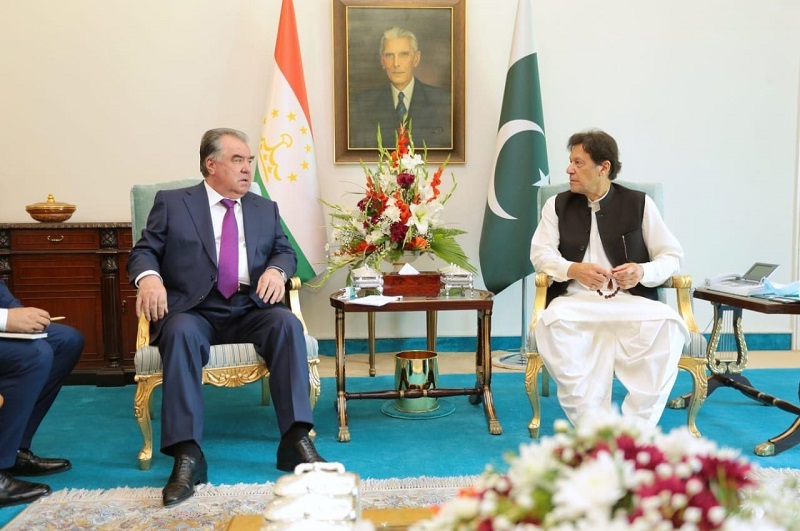 Later in a joint press stakeout, Prime Minister Imran Khan said that the two sides in their talks today have especially emphasized on promotion of trade relations.

The prime minister confident that the memorandums of understandings (MoUs) and the agreements signed with Tajikistan will also go a long way in strengthening relations in the areas of education, defense, culture, and art.

However, he noted that political settlement in Afghanistan after the US withdrawal is of vital importance both for Pakistan and Tajikistan to promote their trade. He said that there is a need of such a consensus government in Afghanistan which saves the Country from plunging into anarchy.

The prime minister said Pakistan and Tajikistan are also faced with the challenge of climate change and both sides have agreed to collectively raise their voice on the matter. He said that Pakistan backs Tajik proposal of declaring 2025 the International Year of Glacier Protection.

Alluding to the situation in Indian Illegally Occupied Jammu and Kashmir (IIOJ&K), the prime minister said relations with India cannot normalize until it reverses controversial steps of 5th August 2019.

In his remarks, Tajik President Emomali Rahmon said that his Country considers Pakistan as a reliable and trustworthy partner at the international stage.

Noting satisfaction over the high-level exchanges between the two Countries, the Tajik president said that we have also highlighted the significant role of the Joint Intergovernmental Commission on trade, economic, scientific, and technical cooperation.

Emomali Rahmon said that the two sides have agreed to resume the business council as well as the joint working groups on energy and infrastructure as soon as the situation improves after COVID-19.

The Tajik President Emomali Rahmon expressed his Country’s special interest in continuing fruitful cooperation of the two Countries in the implementation of energy-related projects including CASA 1000.

The Tajik president also expressed his country’s interest in joining regional transport corridor projects. He said that we have also discussed Tajikistan’s access to Karachi and Gwadar seaports.

Emomali Rahmon said that the cooperation between the two Countries in agriculture and food security will also help supply the region’s organic agriculture products.

The Tajik president reaffirmed his Country’s unwavering support to Pakistan’s continuous efforts in ensuring peace in the region and countering the international terrorism.

President Emomali Rahmon and Prime Minister Imran Khan also signed a joint declaration on the next steps in building a strategic partnership for regional solidarity and integration.