The proactive foreign policy of Pakistan under the leadership of Foreign Minister Bilawal Bhutto Zardari is gaining ground that Pakistan lost during the previous government of PTI that compromised Foreign Affairs for domestic gains.

India’s attempt to secure a permanent seat in the United Nations Security Council (UNSC) has been blocked by Pakistan as it highlighted the failure of the country to meet relevant requirements. This is a win for us and the credit for this must go to our diplomatic team at the UN headquarters and the leadership sitting in Islamabad.

In recent days, we have seen significant diplomatic activity and engagement, particularly with China and the United States.

His Excellency Mr. Yang Jiechi Member of the Politburo of the Central Committee of the Communist Party of China (CPC) and Director of the Central Commission on Foreign Affairs of the CPC. During the visit, Director Yang held delegation-level talks with the Foreign Minister, called on the Prime Minister, and had a meeting with the Chief of Army Staff.

During the visit, Pakistan extended a note of thanks to China for:

The Foreign Minister and the Secretary of State reaffirmed their mutual desire to further strengthen bilateral ties by expanding engagement in trade, energy, health, and security, to deepen Pak-US ties by marking 75 years Anniversary of our diplomatic relations, and appreciated the importance of frequent high-level exchanges in sustaining positive momentum in bilateral ties.

On 1st July 2022, the US Special Representative on Business and Commercial Affairs Mr. Dilawar Syed called on the Foreign Minister.

1st July, FM Bilawal Bhutto Zardari virtually addressed members of the US Congress. FM thanked them for their support towards Pakistan and invited them to visit Pakistan.

The UK High Commissioner, Ambassador-designate of Turkiye, Ambassador of Kingdom of Saudi Arabia, and the US Ambassador called on the Minister of State, Hina Rabbani Khar.

Chief Economist Dr. Emily Blanchard brings to her office rich experience in research on the role of foreign investment and global value chains in changing the role of trade and trade agreements in the 21st century, and globalization and education shaping policy outcomes and the distribution of income within and across countries. She has held eminent positions and is a leading expert on international economic policy, a professor at Dartmouth’s Tuck School of Business, and a research fellow with the Center for Economic Policy Research.

Ambassador Masood Khan in his meeting with Chief Economist Dr. Emily Blanchard discussed Global economic trends and implications of food and fuel insecurity around the globe.

After the meeting, Under Secretary Jose W. Fernandez tweeted that he was “Pleased to see Chief Economist met the Pakistani Ambassador to discuss broad global economic challenges and ways to enhance U.S. – Pakistani economic ties for the benefit of our people.”

The most critical desks in Foreign Office that are working day and night to mitigate the damage done by the previous PTI government are Europe and the Americas and professional diplomats heading these two critical desks under the guidance of Foreign Secretary and leadership of Bilawal Bhutto Zardari are executing their duties amazingly. Sources in Foreign Office indicate that Foreign Minister Bilawal Bhutto Zardari looks keen on listening to his officers and taking suggestions from career diplomats before taking any decision contrary to the former Foreign Minister whose arrogance and stiff behavior were two impediments to a smooth relationship of him with his subordinates.

Such kind of events is an effort to promote business relations and provide opportunities for people to people contacts. 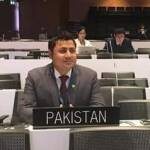