NEW YORK: The Deputy Permanent Representative of Pakistan to the United Nations Ambassador Aamir Khan delivered statement at the Special Meeting on the “Social and Economic Measures to prevent genocide, war crimes, ethnic cleansing and crimes against humanity”.

The ambassador emphasized the importance of enabling circumstances and potential triggers of conflict around the world as grievances over inequitable distribution of power and re-sources appear to be a fundamental motivating factor in the commission of mass violence against ethnic, sectarian, or political groups. 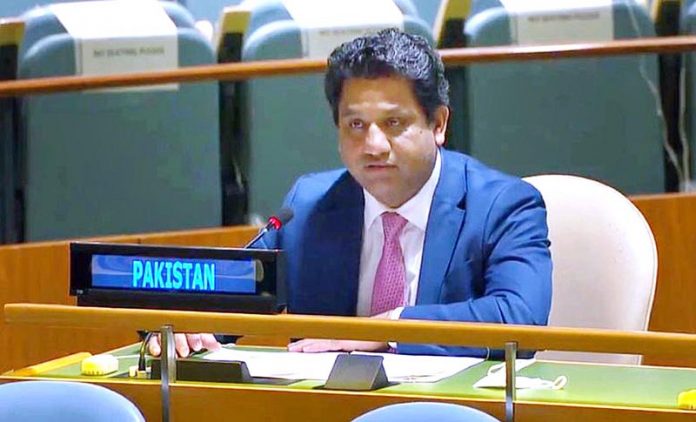 While mentioning the socio-economic risk factors, the most common remain; situations of armed conflict, extreme poverty and defamation and political, economic or social injustice, Ambassador Aamir Khan noted with concern that “societies that have already experienced serious violations of international human rights and humanitarian law or atrocity crimes, or where these are currently taking place, can be more prone to further atrocity crimes”.

“These are typically violations of civil and political rights but they may include also severe restrictions to economic, social and cultural rights, often linked to patterns of discrimination of certain groups, populations or individuals” he said.

Ambassador Aamir Khan drew attention to one specific circumstance where provisions of the principle of protection should apply in “situations of foreign occupation or alien domination, which can easily spiral into genocide, war crimes and crimes against humanity”.


“We would request the views of those who propagate the R2P concept on the need for collective action to protect the people of occupied Palestine or of Indian-occupied Jammu and Kashmir,” he insisted.

“For more than seven decades, India has, through force and fraud, denied the right of self-determination to the Kashmiri people, in violation of multiple resolutions of the Security Council prescribing a free and fair plebiscite,” said Ambassador Khan.

The ambassador also expressed concern on a systematic campaign under way in India by the ruling adherents of Hindutva, saying ” Muslims are murdered by lynch mobs, subjected to periodic pogroms and robbed of their livelihoods and citizenship, under the patronage and with the encouragement of the ruling BJP-RSS government”.

Ambassador Aamir Khan mentioned a BBC documentary has also examined the pogrom against Muslims during riots in the western state of Gujarat in 2002.

“This had “all the hallmarks of an ethnic cleansing” according to the Documentary,” he added.

“Noticing this dangerous trend, Professor Gregory Stanton, the founder of Genocide Watch, has warned that a genocide of Muslims could very well happen in India,” he said.

“Such crimes fall squarely within the ambit of the World Summit’s decisions on the responsibility to protect,” he said.

“The concept of “Responsibility to Protect (R2P)”, as articulated in paras-138 and 139 of the World Summit Outcome documents, continues to evoke varying perspectives as well as conflicting interpretations”.

Ambassador Aamir Khan expressed deep concern that even after several years, a consensus on the scope of the principle has not been achieved and its application remains driven solely by political considerations.

“It is obvious that we need further objective discussion on the application of the R2P concept. Pakistan looks forward to such a discussion,” he concluded.