The talks were marked by exceptional cordiality and a commitment to fortify the upward trajectory in the bilateral relationship.

The prime minister conveyed sincere regards to the Custodian of the Two Holy Mosques His Majesty King Salman bin Abdulaziz, and thanked the Crown Prince for his gracious invitation to him to visit the Kingdom.

The prime minister expressed gratitude for affording him the opportunity to visit the two Holy Mosques during the special days of Ramadan.

The two leaders reaffirmed the strong and historic bonds between the two Countries rooted firmly in shared beliefs, common values, mutual trust, and a longstanding tradition of mutual support. 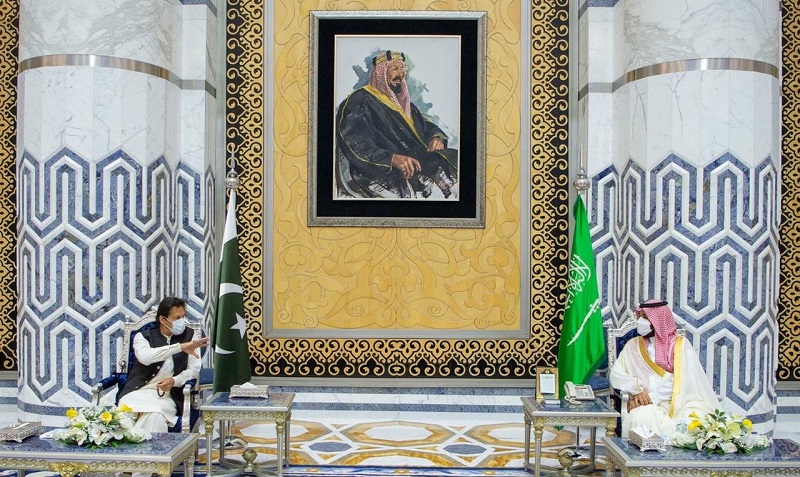 Prime Minister Imran Khan reiterated Pakistan’s abiding support for the sovereignty and territorial integrity of the Kingdom, and expressed special reverence accorded to the Land of the Two Holy Mosques by the people of Pakistan.

During the meeting, it was agreed to further strengthen, deepen and diversify the existing bilateral political, economic, trade, defence, and security ties.

Special emphasis was laid on increasing Saudi investments in Pakistan, collaboration in the field of energy, and increased job opportunities for Pakistanis in Saudi Arabia.

The prime minister appreciated the Crown Prince’s recently launched “Green Saudi Arabia and Green Middle East” initiatives & hoped to build upon the synergies between the vision of the Crown Prince & his own environment-related initiatives including the “10 Billion Trees Tsunami”.

While acknowledging the positive and constructive role of more than two million Pakistani Diaspora in the Kingdom, the two leaders discussed ways to maximize mutual benefit from cooperation in the human resource sector.

The prime minister thanked the Saudi leadership for taking considerate measures for the welfare of Pakistani expatriates during the COVID-19 pandemic.

Views were exchanged on regional and international issues.

The prime minister outlined his vision of a peaceful neighborhood to advance the objectives of national economic development.

The prime minister lauded the Crown Prince for the Kingdom’s efforts and initiatives aimed at reinforcing and further promoting regional peace and security.

The Council, Co-chaired by the Prime Minister and the Crown Prince, is designed to impart strategic direction to the development of Pakistan-Saudi relations.

Prime Minister Imran Khan expressed the hope that the SPSCC will play a catalytic role in fostering enhanced bilateral Pakistan-Saudi Arabia cooperation in all fields.

The two leaders also witnessed the signing of a number of bilateral agreements/Memoranda of Understanding (MoU) including Agreement on Cooperation in the Field of Combating Crimes; Agreement on Transfer of Convicted Individuals (Prisoners); MoU on Combating Illicit Traffic in Narcotic Drugs; Psychotropic Substances & Precursor Chemicals; and Framework MoU for financing of projects (totaling up to US$500 million) in energy, hydropower generation, infrastructure, transport and communication, and water resource development.