KARACHI, Pakistan: Senator Mushahid Hussain Syed has said that China Pakistan Economic Corridor (CPEC) is translating into reality an amazing prophecy made by the Father of the Nation Quaid-e-Azam Muhammad Ali Jinnah to an American magazine in January 1948, when he said: ‘Pakistan is the pivot of the world, placed on the frontier where the future geopolitics will revolve’.

In his keynote address to the CPEC Summit in Karachi attended by 300 delegates from Pakistan and China on Tuesday, Senator Mushahid Hussain said that CPEC has already yielded dividends, with 22 Early Harvest Projects on track in energy, infrastructure, Gwadar Port and Special Economic Zones (SEZs), with an investment of $ 18.8 billion. He said that 60,000 Pakistanis are gainfully employed in Chinese projects, with many more to come, 25,000 Pakistanis are learning Chinese, 22,000 Pakistani students now study in China.

Senator Mushahid Hussain, who has been heading the Parliamentary Committee on CPEC, said that as the CPEC Summit has demonstrated with high-level participation from the federal government & all the four provinces, there is a broad national consensus on CPEC as the way forward for the progress and prosperity of Pakistan and its people. 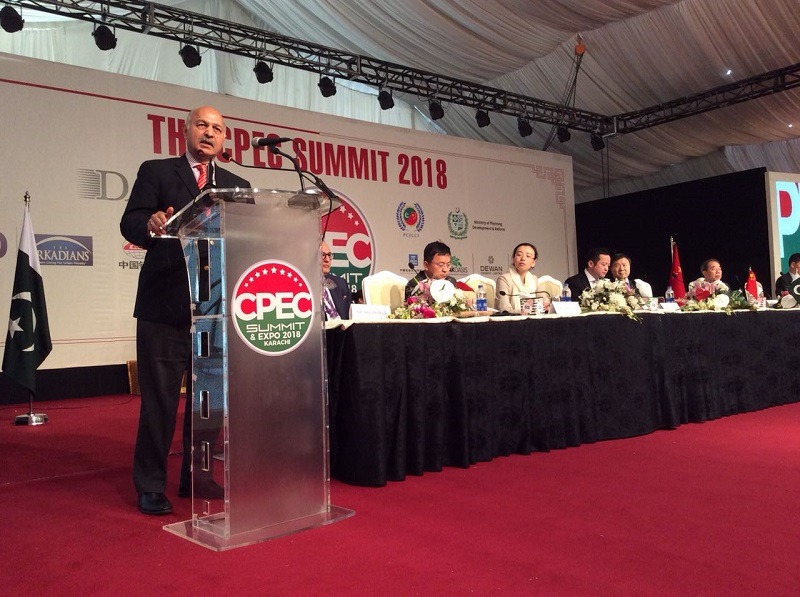 In addition, he said that the balance of economic and political power is shifting from the West to the East, the 21st Century is the Asian Century, China is today as President Xi Jinping said, ‘at the Center stage of global politics’. Pakistan is today the hub of regional connectivity, linking up with China and the Central Asian Republics.

Citing achievements of CPEC in the last five years, he said that the Gwadar Port is operational lifting a million tons of cargo in 2017, Thar is mining coal which will be transformed into electricity, the Western Route connects Quetta with Gwadar via an eight hour road journey and the nearly 4000 megawatts of electricity produced by CPEC projects will alleviate load shedding.

Mushahid Hussain said that the ‘best of CPEC is yet to come’ since the long term plan has added to CPEC such areas as agriculture, culture, tourism, IT, education and relocation of Chinese small and medium size industry, which can be absorbed by the nine SEZs which are planned in all provinces of Pakistan.

Concluding his address, Senator Mushahid Hussain cited three major challenges to CPEC; security, given the threats of terrorism both within Pakistan and from regional adversaries; psychological warfare from the enemies of China and Pakistan who spread disinformation about CPEC; and political stability and continuity of policies on CPEC, which requires that a free, fair and transparent election be held on schedule.

Mati
Mati-Ullah is the Online Editor For DND. He is the real man to handle the team around the Country and get news from them and provide to you instantly.
Share
Facebook
Twitter
Pinterest
WhatsApp
Previous articleCPEC to have salutary effect on regional development: Khawaja Asif
Next articleFive policemen martyred in Quetta suicide blast