Prime Minister of Pakistan, Shahbaz Sharif released this newly re-recorded and newly composed on Sunday, 14th August 2022. The earlier National Anthem was traditionally sung and composed. However, for the re-recorded national anthem, the Government of Pakistan chose 155 singers, 48 musicians, and 6 bandmasters.

The 75th Independence celebration occurred in Jinnah Convention Center where Prime Minister, Shahbaz Sharif released the new anthem. He did the flag-hoisting custom and addressed the audience about the economic prosperity of Pakistan.

Shahbaz Sharif is the second-elected Prime Minister who has got the honour to reveal the national anthem. The first being Liaquat Ali Kahn in 1954. The government joined together with different institutions of the country to bring this re-recorded anthem in the modern composition to the public. Ministry of Information and Broadcasting and ISPR did their collaborative efforts to bring a national anthem.

The new video of the anthem shows the mixture of all Pakistani cultures and representatives of all the provinces. Pak Army, Pakistan Navy, and Pakistan Airforce did their efforts to make this anthem. It shows all the colours that Pakistanis are made of. Take a look at the rerecorded anthem after 68 years here. 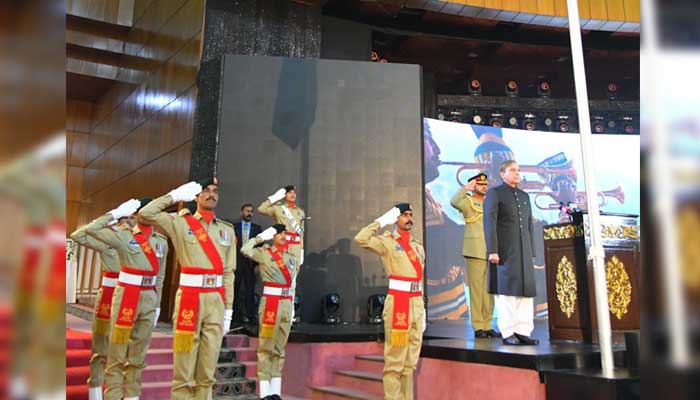 The Prime Minister of Pakistan, armed forces, law enforcement agencies leadership, and Parliamentarians attended the ceremony. Shahbaz Sharif vowed to make the nation an economic power in the world in the long run. He said, “If we can become a nuclear power, we can also become an economic power but for it, we have to strive day and night and prove to the world that we are no less than anyone in the world.”

Shahbaz Sharif also focuses on the national unity o Pakistan. Because he stated that internal division, disruption and chaos cause negative effects on the country and deprive it of its true national purposes.

From the government to the private sector, almost everyone arranges the flag-hoisting ceremony in Islamabad and all across the provinces.

Along with the release of the Pakistan National Anthem re-recording, many famous personalities laid their statements on the prosperity of Pakistan. The President of Pakistan, Dr Arif Alvi said, “We need to remain united to overcome financial, economic and security challenges faced by the country. Let us pledge that we will remain steadfast to render any sacrifice for the dignity and self-respect of our people and greatness and glory of our beloved homeland.”

He also laid emphasis on remembering the people of Indian Illegally Occupied Jammu and Kashmir while celebrating our independence.

Duaa Naeem
Duaa Naeem is a fresh graduate who is utilizing her writing skills into writing articles that are informative for the readers.
Share
Facebook
Twitter
Pinterest
WhatsApp
Previous articlePakistan: The Dream Of Forefathers
Next articleTaliban have been caught off-guard when Zawahiri was killed in US strike, indicates Express Tribune