Pakistan, Maldives to work together to strengthen Muslim solidarity

MALE, Maldives: Prime Minister Nawaz Sharif and the Maldivian President Abdulla Yameen Abdul Gayoom have agreed to work together to strengthen the solidarity of the Muslim Ummah and promote the true values of Islam internationally.

The understanding was reached when the prime minister visited Male for a three-day visit from July 25 to 27 and met the Maldivian president to discuss ways of further strengthening the bilateral cooperation and people to people contacts.

The two leaders also discussed ways on further enhancing cooperation at both regional and international fora.

Both the leaders acknowledged that bilateral relations between the Maldives and Pakistan are characterized by cordiality, mutual respect and commonality of interests. 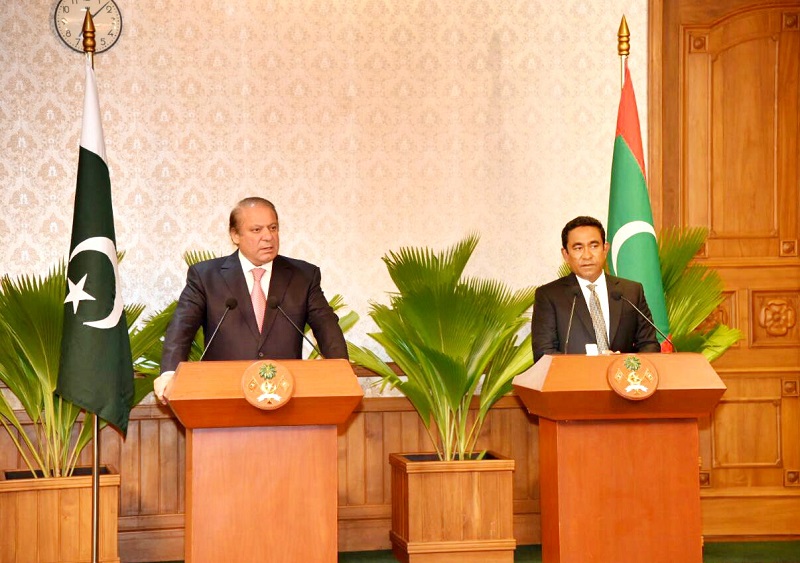 The Maldivian president thanked the prime minister for Pakistan’s continued investment in the development of Maldives, and invited investors to seize the opportunities to contribute further.

President Yameen assured security and safety for foreign investments, and highlighted the work carried out by the government to strengthen investor confidence.

The prime minister highlighted Pakistan’s positive economic growth and underscored its policies for the security and safety of foreign investment and increasing investor confidence in Pakistan.

Both leaders welcomed the establishment of the Maldives-Pakistan Joint Business Council and Joint Working Group on Trade, as mechanisms that will promote business, trade and investment cooperation, enhance collaboration between private sector operators as well as strengthen institutional relations.

In order to further enhance the trade relations between the Maldives and Pakistan, both the leaders also underscored the importance of increasing connectivity between the two countries by reviving more direct air links between both countries.

While noting the close traditional and cultural ties and the distinct and unique tourism industries of both countries, President Yameen highlighted the importance of enhancing cooperation in the field of tourism and stressed the benefits of sharing expertise in the hospitality industry.

Moreover, the Maldivian president welcomed the support of Pakistan in enhancing youth development programmes in the Maldives.

Both leaders hence agreed to have youth exchange programmes to foster close ties in various sectors.

The president acknowledged the important contributions made by Pakistan to the development of the Maldives in the area of education and capacity building.

Prime Minister Nawaz Sharif expressed the commitment of Pakistan to continue supporting the development of the Maldives. He announced a special grant of $5 million as a gift by the people of Pakistan for the Maldivian people.

While recognizing climate change as the biggest threat to development, both leaders agreed to work together to address the adverse impacts of climate change.

The prime minister congratulated the Maldives for its continuous work on this front, especially as the Chair of Alliance of Small Island States (AOSIS).

In addition, the two leaders reaffirmed their unequivocal and uncompromising position against terrorism in all its forms and manifestations.

President Yameen appreciated Pakistan’s efforts in combatting terrorism and violent extremism, and underscored the importance of mutual cooperation in this area.

Likewise, the two leaders noted the close cooperation and coordination between the two countries at regional and international fora on issues of mutual importance.

Both leaders agreed to further promote cooperation between the countries of South Asia including through the South Asian Association for Regional Cooperation (SAARC).

In this regard, President Yameen reiterated the support of the Maldives hosting of the SAARC Summit in Islamabad.

Besides during his visit, Prime Minister Nawaz Sharif also participated in the 52nd Independence Day celebrations of the Republic of Maldives as the Chief Guest.

The prime minister congratulated the people and the government of Maldives on the auspicious occasion of its Independence.

During the prime minister’s visit, a number of Memorandums of Understanding (MoUs) and agreements were signed between the Countries with the aim of enhancing cooperation in the fields of tourism, climate change, trade, education, and civil service cooperation and for capacity building of diplomats.

In addition, Joint Working Committees were constituted to oversee the implementation of MoUs signed between the Maldives and Pakistan.

Mati
Mati-Ullah is the Online Editor For DND. He is the real man to handle the team around the Country and get news from them and provide to you instantly.
Share
Facebook
Twitter
Pinterest
WhatsApp
Previous articleMilitants fleeing Pakistan have found sanctuaries in Afghanistan: Envoy
Next articleRs 1.68 billion saved in power projects: Ishaq Dar