RAWALPINDI, Pakistan: The Chief of General Staff of the Armed Forces of Republic of Kyrgyzstan Major General Rayimberdi Duishenbiev held a meeting with the Chief of Army Staff (COAS) General Qamar Javed Bajwa at Pakistan army’s general headquarters (GHQ) in Rawalpindi on Tuesday.

In a statement, the Inter Services Public Relations (ISPR) said that during the meeting between the two military leaders, matters of mutual interest including military to military relations, regional security situation and measures to further enhance Pakistan-Kyrgyzstan bilateral defence cooperation were discussed. 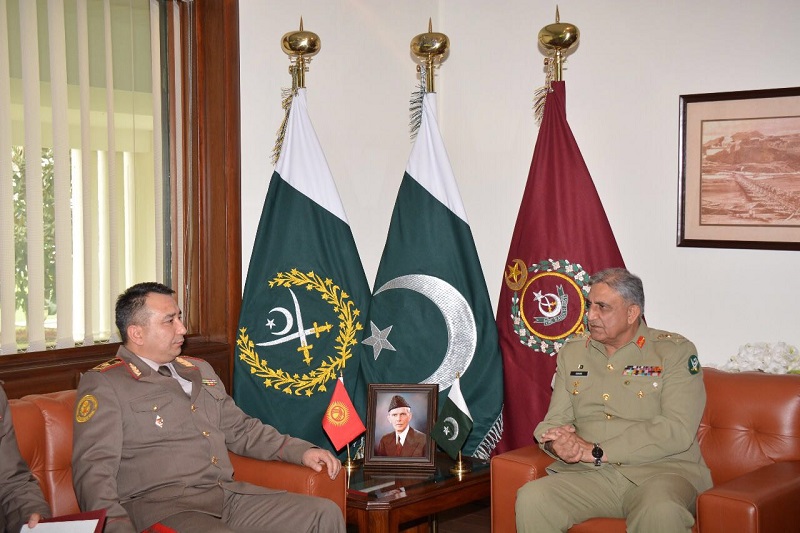 Earlier on his arrival at GHQ, the Chief of General Staff laid a floral wreath at Yadgar-e-Shuhada.

A smartly turned out contingent of Pakistan army presented the Guard of Honour to Chief of General Staff of the Armed Forces of Republic of Kyrgyzstan.

Prior to that, the visiting Iranian Foreign Minister Javad Zarif along with a delegation also met the COAS at army’s general headquarters, and discussed matters of mutual interest, regional security and Pakistan-Iran relations.

Mati
Mati-Ullah is the Online Editor For DND. He is the real man to handle the team around the Country and get news from them and provide to you instantly.
Share
Facebook
Twitter
Pinterest
WhatsApp
Previous articleNawaz lauds Shahbaz Sharif’s unprecedented performance in Punjab
Next articlePTV Sports HBL PSL 2018 Multan Sultans vs Islamabad United Live Streaming