During the meeting, the ambassador proposed that there are various areas of cooperation between the two brotherly Countries specifically in tourism and sports which could bring two nations even closer. 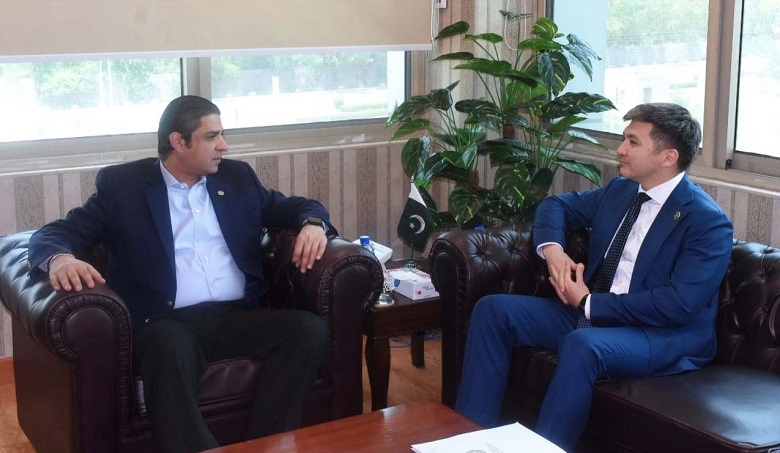 The Kazakh ambassador told the federal minister that recently a large exhibition of Pakistan (Gilgit-Baltistan) products was arranged in the largest metropolis Almaty.

The federal minister welcomed the proposals and said that we are also looking forward to take these friendly relations to new heights specifically in sphere of sports involving youth from both the nations.

The minister also said that both nations enjoy 30 years of diplomatic relations and we have to work mutually for extending these beyond the current status.

Ehsan Ur Rehman Mazari further said that Pakistan is a home to the world’s second highest mountain in the world K-2 along with other high peaks, this could be a greatest attraction for mountaineers from Kazakhstan.

Moreover, both agreed to work at their respective ends for enhancing the bilateral trade and expand its volume which is currently not very high.

The minister also welcomed the start of direct flights from Karachi to Almaty which is going to start this year, he said this will boost people to people contact between two friendly countries.

The ambassador told that initially two flights in a week will be started and the number will increase up to 5 in coming months.

Mati
Mati-Ullah is the Online Editor For DND. He is the real man to handle the team around the Country and get news from them and provide to you instantly.
Share
Facebook
Twitter
Pinterest
WhatsApp
Previous articleChief of Joint Staff Argentina meets Minister for Defence Production
Next articleBeaconhouse School shortlisted in T4 World’s Best School Prizes