DHAKA, Bangladesh: The High Commissioner for Pakistan Imran Ahmed Siddiqui met Bangladesh’s Minister of State for Foreign Affairs Shahriar Alam at the Ministry of Foreign Affairs in Dhaka on Thursday and discussed issues of mutual interest and agreed to work further for the promotion of bilateral relations.

The High Commissioner handed over a signed copy of the Tripartite Agreement of 1974 to the State Minister which had addressed all the outstanding issues between Pakistan and Bangladesh.

The High Commissioner said that the agreement should serve as a foundation for further strengthening of the existing fraternal relations. 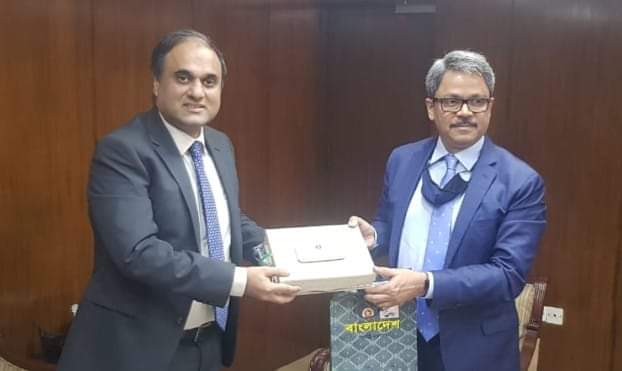 The High Commissioner further underlined that in order to establish productive commercial relations, there was a need to address all non-trade barriers and efforts need to be made to facilitate frequent interaction between the business sectors of the two Countries.

In this connection, the High Commissioner further informed the Minister that Pakistan had already removed all restrictions on Pakistani visa for Bangladeshi citizens.

The two sides agreed to intensify bilateral contacts at all levels.

Mati
Mati-Ullah is the Online Editor For DND. He is the real man to handle the team around the Country and get news from them and provide to you instantly.
Share
Facebook
Twitter
Pinterest
WhatsApp
Previous articleFM Qureshi interacts with African Envoys based in Islamabad
Next article2,435 more COVID infections and 48 deaths recorded in Pakistan