ISLAMABAD, Pakistan: The Ukrainian Diplomat Vitaliy Zayonchkovsky has said that Pakistan has rich tourism potentials and bilateral tourism can be developed between Ukraine and Pakistan.

Vitaliy Zayonchkovsky, who is a Ukrainian Diplomat working with the Foreign Ministry of Ukraine in a department which is responsible for relations between Ukraine and Pakistan, spent his time in Pakistan while attending a course at the Diplomatic Academy of Ministry of Foreign Affairs of Pakistan in Islamabad.

In an interview with Dispatch News Desk (DND) News Agency, Vitaliy Zayonchkovsky said that people to people contact between Ukraine and Pakistan is needed to further enhance excellent relations between the two countries.

When he was asked to share his impression for staying in Pakistan, he said:

“When I arrived from Kyiv to Islamabad, it was winter. I was surprised to be in the summer (in Islamabad) after winter. The trees turned green and flowers bloomed. Islamabad turned out to be a green city, and I compared it with Kyiv, which is also considered one of the greenest capitals in Europe and the world. Clean air, lack of traffic, spacious streets, many green areas. All this is noteworthy. In a word – Islamabad is a modern city”. 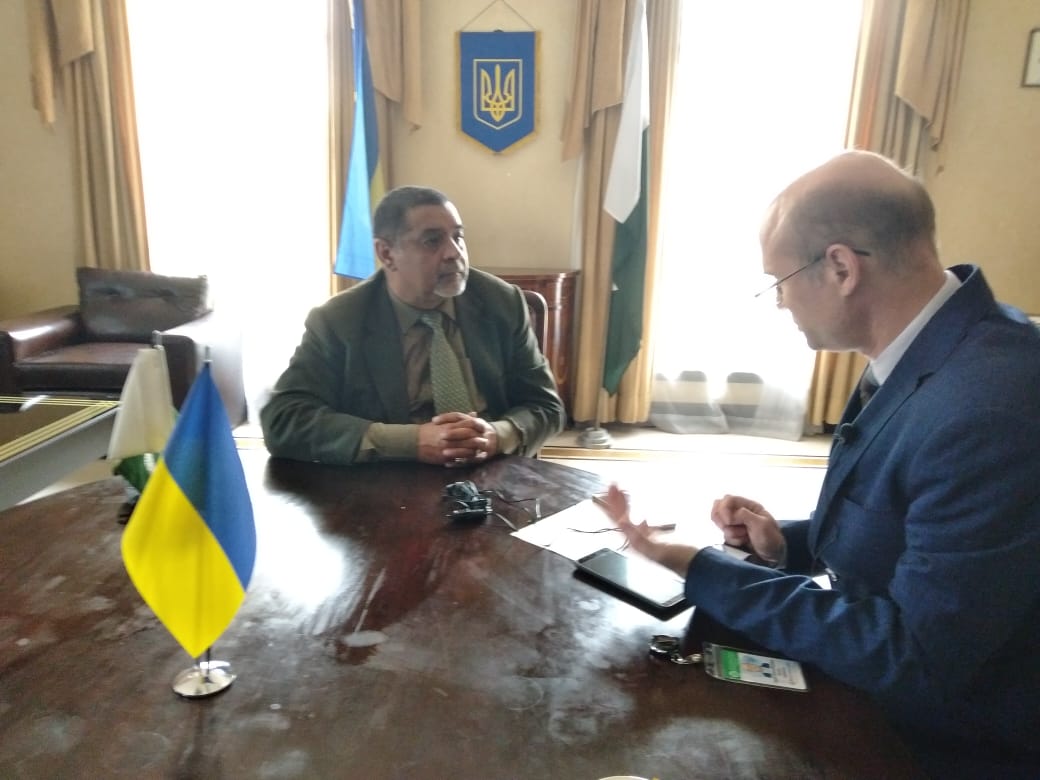 When asked to explain the situation in Crimea which has been illegally annexed by Russia, he stated that since February 2014, Russia has occupied Crimea and since then there have been constant violations of human rights, especially the rights of Crimean Tatars.

He added that at the moment, Russia is working to legitimize this aggression.

“To this end, Russia is trying to absorb Crimea in such a way as to convince world opinion of the legality of this aggression and is doing everything so that the world forgets the Crimean question”, he maintained.

When asked how can we (Pakistan and Ukraine) improve already excellent bilateral relations, he said:

“First of all, we must develop relations between people. This is a wide range of relationships, starting with the education of Pakistani students in Ukraine, Ukrainian students in Pakistan. It could also be a tourism development. Ukraine and Pakistan are travel countries with great potential. At the moment, Ukraine receives 20 million tourists a year, Pakistan, as far as I know, has received 2 million tourists, which of course is much lower than the country’s potential. And you need to work more in this direction, promoting these tourist opportunities and charms for Ukraine and vice versa. It can be a mutual exchange of operators who will hold presentations in both countries, it can also be advertising companies. Of course, there is such potential and it needs to be realized”.
When asked what are (were) the most interesting places in Ukraine for tourists, he commented:

Each region in Ukraine, as well as in Pakistan, has its own special places and its charms. Of course, Kyiv is a historical place with a history of more than two and a half thousand years of history, this is, of course, the Carpathians in the west of the country. The Carpathian Mountains resemble the Himalayas and in Kashmir. The same green and wooded. In Pakistan it is the Arabian Sea, in Ukraine, it is the Black Sea. In each place, there are many monuments of antiquity and architecture.
The city of Odessa, with a unique atmosphere. Each city is a historical center that deserves attention to watch.

When he was asked to comment about what similarities we can find between Pakistani and Ukrainian societies?, he said:

“Before traveling to Pakistan, I heard many times about the general features of the Pakistani and Ukrainian peoples. And for me the question remained open, where are the origins of these common features.
Features can be seen in folk clothes, jewelry, on some common traditions associated with celebrations. This is the tradition of Pysanka, the tradition of embroidery. The characteristic of the two peoples is hospitality.
During a visit to Karachi, we visited the State Bank Museum, otherwise, it is called the Museum of Money. We managed to touch these coins and just saw the symbols that make it possible to get the right answer. I was to see that Indo-Scythian artifacts and I came to know that there was a Scythian-Sarmatian state in Pakistan.
In particular, it is the Indus Valley, it is Rajasthan, Gujarat and the upper part of the Ganges Valley. Interestingly, this state existed from 55 BC to 405 AD. Perhaps here lies the key to understanding these shared cultures and traditions. Ukraine in its history also had a period of Scythian statehood, the Sarmatian period. Of course, all this is at the level of assumptions. Scientists must answer this question”.