Pakistan has issued around 80,000 visas to Afghans: Sadiq

ISLAMABAD, Pakistan: The Prime Minister’s Special Representative for Afghanistan Ambassador Muhammad Sadiq said that Pakistan has issued around 80,000 visas to Afghans and a few are for less than a year.

While speaking at the fifth Pak-Afghan Trade and Economic Connectivity Focused Group Discussion (FGD) in Islamabad on Thursday, the Special Representative for Afghanistan said that students are getting visas for the entire time period of their scholarship which is a clear indication that things are moving in the right direction, though we have to be patient.

The event was spearheaded by the Center for Research and Security Studies (CRSS) and Pakistan Afghanistan Joint Chambers of Commerce and Industry (PAJCCI).

In the discussion, Muhammad Sadiq said that complex issues accumulating over years would take some time for resolution; we should not lose any gains made so far.

The ambassador said that Pakistan and Afghanistan have taken some principled decisions within the last six months in order to move forward in an organized way. He said that trade diplomacy should continue irrespective of the political environment, reciprocity should be in the positive, a tit-for-tat approach be avoided, and the common man should not bear the brunt of something done by an individual or a group.

Moreover, the Parliaments of both sides are now on-board, he said. 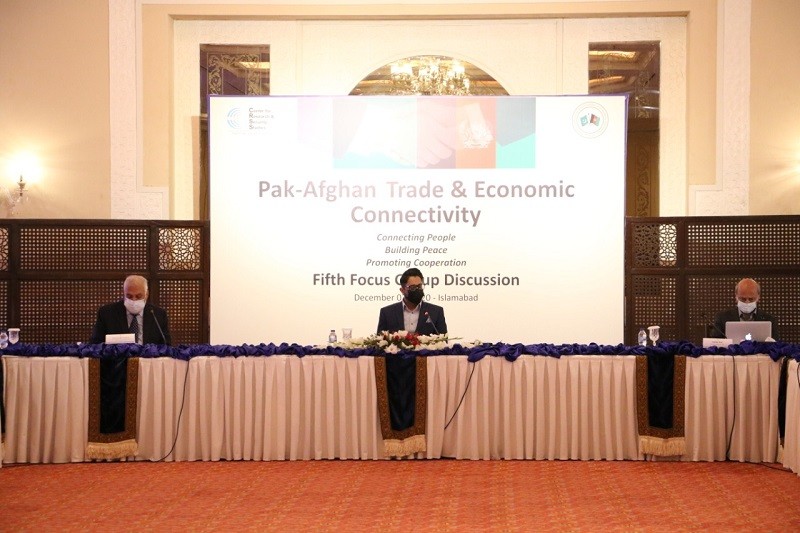 The Special Representative said that Pak-Afghan traders highly appreciate the recent swift and positive developments between the two Countries over the course of the last few months.

Sadiq added that Islamabad and Kabul now seem committed more than ever to resolve issues of mutual interest in a structural manner.

The Chairman PAJCCI and Vice-Chairman Afghanistan Chambers Federation Khan Jan Alokozai said that it is the beginning of a new chapter of economic connectivity and enhanced trade between the two Countries.

Jan Alokozai further said that the appointment of special envoys to expedite the progress on the bilateral front well reflects the seriousness being shown by the leadership on both sides.

Though, he cautioned that such positive gains should not be short-lived. Both sides have to continue bilateral engagements with the goodwill to move forward and not be the prisoners of history.

The former Afghanistan’s Minister for Finance Muzammil Shinwari apprised the participants that both sides are proactive in taking meaningful reforms on paper, but when it comes to implementation, much needs to change.

Muzammil Shinwari said that Pakistan needs to really work on making business for Afghan traders a lot easier and cheaper, not because it is beneficial for Afghans but advantageous for Pakistan as well.

We should be sharing real-time data regarding trade and transit to minimize the structural hindrances obstructing the traffic flow across the border, he added.

The Afghan delegation was of the view that Pakistan may consider utilizing another crossing point, right next to Torkham, naming Khwar.

The delegation said that this would allow operations through Torkham and Khwar for exclusive entry and exit points, allowing an uninterrupted flow of trade and transit.

They also said that if the trade of cement and coal could entirely be diverted to Ghulam Khan crossing point, this could significantly reduce the traffic congestion at Torkham and Chaman. They said that Afghan traders also complained about the scanning and tracking issues.

The government officials from the Pakistani side responded that scanning and tracking issues have been resolved to a certain extent.

Moreover, the Expression of Interest (EOI) has been floated to involve more private companies for the purpose to bring in the factor of competition, resulting in cheap and sufficient services.

The official further said that Pakistan now has an integrated scanning system, and vehicles are only stopped at Torkham again on the basis of suspicion. Though, we are still working on enhancing the system and fix loopholes. Any mishandling or corruption in this regard may be an individual case but not a state policy.

Additionally, the Federal Board of Revenue (FBR) representative said that to facilitate bilateral trade and transit, joint checking of the vehicles has started. He said that at present, Frontier Constabulary (FC) and Customs are jointly checking the vehicles; National Logistics Cell (NLC) will also join in soon.

The representative said that the FBR has sent a detailed report for the operationalization of Ghulam Khan crossing point for transit too. Now the ball is the court of the Ministry of Commerce (MoC). As the constructive and positive discussion wrapped up, both sides offered helpful suggestions to improve trade flow and both sides pledged to keep economics and trade detached from politics for regional stability and sustainable development.

Other members of the Afghan delegation included the Vice Chairman of the Afghanistan Chamber of Commerce and Investment Soltan Muhammad Safi, the Chairman Nangarhar Chamber of Mines and Industry Tor Malang Shegewal, the Vice President Afghanistan Women Chambers of Commerce and Industry Parwarish Oryakhail, the Executive Director PAJCCI Naqeeb Ullah Safi, the Commercial Counselor at the Afghan Embassy in Islamabad Sameena Wadeer, the Second Secretary Incharge Economic Affairs at the Afghan Embassy Bahram Mohammadi, and the Afghan Businessman Babrak Akbare.

Mati
Mati-Ullah is the Online Editor For DND. He is the real man to handle the team around the Country and get news from them and provide to you instantly.
Share
Facebook
Twitter
Pinterest
WhatsApp
Previous article
Int’l Day of Persons with Disabilities: Pakistan expresses solidarity with Kashmiri victims
Next article
Wagah-Attari trade vital for Indo-Pak peaceful ties: Indian Punjab Finance Minister
Share
Facebook
Twitter
Pinterest
WhatsApp