Pakistan has around 47% of children population: Riaz Fatyana

Riaz Fatyana acknowledged that unfortunately, Pakistan hasn’t delivered on its international and national commitments towards child rights; however, the current government is striving to change this situation.

The Chairman recalled that Prime Minister Imran Khan’s first speech to the nation in which he mentioned the dire state of children health in Pakistan. 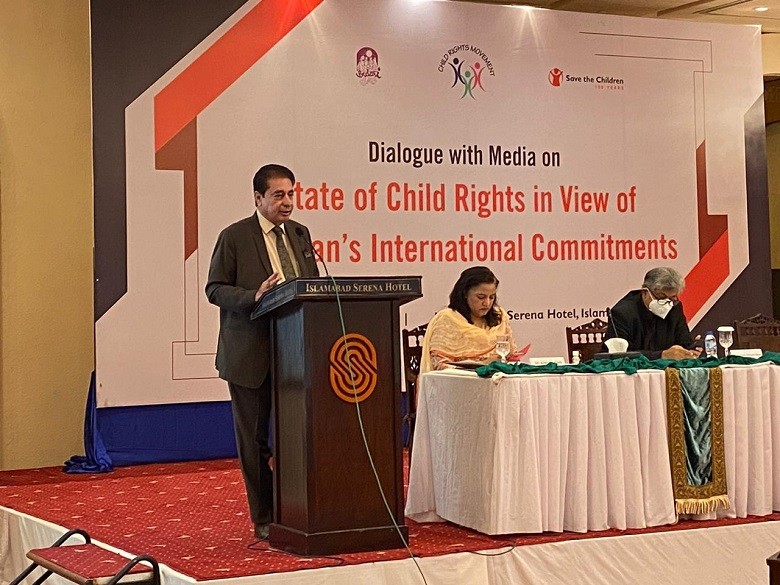 The Chairman National Assembly Standing Committee also alluded to The Zainab Alert, Response and Recovery Bill, 2020, Ehsaas Undergraduate Scholarship Program, and other steps taken by the government to safeguard the rights of Pakistani children.

Talking about the Role of the National Commission on Child Rights (NCRC), the Chairperson NCRC Ms. Afshan Tehseen Bajwa mentioned that the formation of this commission is a step in right direction for safeguarding the rights of the children as now policymakers are worried about the international commitments.

The NCRC is especially focusing on issues of girls’ education, early child and forced marriages, and access to health and hygiene. Increasing participation of children in policy matters related to them is another key goal of the commission.

The Senior Child Rights Activist Dr. Syed Safdar Raza mentioned that due to lack of will from policymakers, Pakistani children are deprived of their rights to survival, protection, and development.

Dr. Syed Safdar Raza shared that Pakistan failed on most of the child-related indicators of Millennium Development Goals and Pakistani children are still facing the issues of poor health and malnutrition. Pakistan also has 22.84 million out-of-school children which is the 2nd highest figure in the world. In addition, there’s a wide gender and class divide in the provision of child rights.

The activist shared that approximately 12 million Pakistani children are engaged in labour force and many of them are involved in hazardous forms. The figure also includes over 1.2 million children living and working on the streets. Child marriages, trafficking for commercial and sexual exploitation, child sexual abuse is also on the rise.  He shared that all political parties have to unite and make across the board efforts otherwise Pakistani children will continue to suffer.

The participants were of the view that children are not our future. They are our present – here and now.

Mati
Mati-Ullah is the Online Editor For DND. He is the real man to handle the team around the Country and get news from them and provide to you instantly.
Share
Facebook
Twitter
Pinterest
WhatsApp
Previous articleChehlum of Hazrat Imam Hussain observed
Next articleArmenia continues to target civilian population and avoiding negotiations: Azerbaijan Ambassador Ali Alizada