Newly elected Foreign Minister of Pakistan Shah Mehmood Qureshi on Monday (August 20, 2018) gave a glimpse into the direction of the incoming government’s. 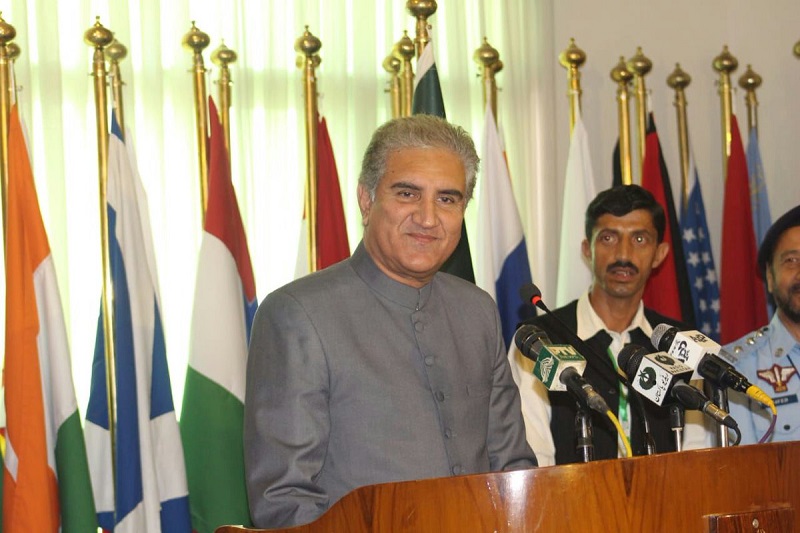 Following is his first Press Conference in Islamabad after being sworn-in as Pakistan’s Foreign Minister:

“I want to give a message to the world that the start of Pakistan’s foreign policy begins and ends at Pakistan.

Our foreign policy, will be one of peace-making in the world. Imran Khan’s focus will be Pakistan’s common man and how through economic diplomacy and international engagement we can make his quality of life better.

We are aware that we have unlimited challenges. But our will and resolve to do this is strong. Some forces have been trying to run Pakistan into isolation and marginalisation. And why wouldn’t they do it? Your country didn’t have a foreign minister, who is meant to be your chief diplomat. This gives your opponent’s open playing fields.

It will be my effort and wish to have a national consensus on foreign policy; a bipartisan approach and today bringing forward that approach I invite our opposition; Hina Rabbani Khar, Khawaja Asif, and representation from the MMA to come and join us on the table to think on foreign policy.

An important event is coming up; the UN assembly where I will be representing Pakistan and where we have to present Pakistan’s case to the world. I invite them to join us.

My effort will be to bridge trust deficits and in what way; and what the hopes and aspirations of the people of Pakistan are. I will announce my first steps after a meeting with our team and consult with those who have been working in the foreign policy arena.

I will call the Afghan foreign minister, and plan to visit them at a mutually convenient time. I want to take an important message for the people of Pakistan. Our future and geography are joined together.

Our way to peace is joined together and we need each other. We have to move away from the problems of the past and go forward with strong intent and thought.

There are many people who I have good relations with in Afghanistan. When I was foreign minister, Mr. Ashraf Ghani had a separate role. Today he is at a different stature. I want to tell the people of Afghanistan we need to become each other’s support base. And we have the capability to become a good support mechanism for each other. I have heard that we have a bilateral agreement in place which has 5 tracks and we want to move forward with those.

My second message is for the government of India. I want to tell the Indian foreign minister that we are not just neighbours; we are atomic powers. We have a lot of common resources. Us coming to the table and talking peace is our only option. We need to stop the adventurism and come together. We know the issues are tough and will not be solved overnight, but we have to engage.

We cannot turn the face the other way. Yes we have outstanding issues. Kashmir is a reality; it is an issue that both our nations acknowledge.

Atal Bihari Vajpayee who is no longer in this world, he came to Pakistan. He came to Lahore and Islamabad and he acknowledged the reality of Pakistan and that Kashmir is our outstanding issue. The Islamabad declaration is a part of our history.

We need a continued and uninterrupted dialogue. This is our only way forward.

My third message is for the Pakistani missions abroad. You are not rulers, you are meant to serve. The intent with which PM Imran Khan addressed the nation, our attitudes will have to change towards our people.

A good nature, courtesy never makes you lose anything. You gain friends. Treat our overseas Pakistanis with respect. This is the duty of all our embassies abroad now.

I am aware of the challenges. And nations are put under such tests. We know our foreign challenges, our economic challenges. As the vice chairman of the ruling party, I played a small part in developing our agenda and 100 day plan and I want to work towards its implementation.

I know we have competent officers in our foreign office and I will continue to take guidance from them. We have so many experts who reside in the country, academia and think tanks who we will also engage. Brainstorming together is the way forward.

We will move forward together, and as a nation and will work towards living respect for Pakistan in the world. Our foreign secretary just told us that the Indian foreign minister has congratulated Imran Khan and expressed the will to commence dialogue.

My approach on issues of foreign policy is to take everyone together. Pakistan’s focus is always united on the benefit of the people of Pakistan. Wherever I need guidance from, I will take.

I have had the opportunity to work with Condoleezza Rice, Hillary Clinton, Richard Holbrooke. I understand their reservations, but we will also put forward our own reservations to them. There are big nations and small nations, but there is no compromise on national self-respect.

We have to bridge the trust deficit and put forward Pakistan’s trust deficit. We will do all of this with full consultation with Prime Minister Imran Khan. According to the information I have; there are 17 diplomats from Pakistan in different missions. Principally; their tenure ends with an incoming government. I would like to assess their performance and see the role they played and appointments will be performance based. No one should take it for granted that they will sit in those positions. We will assess who meets our goals and our game plan. But we will not without reason dismiss anyone; I request them to continue working where they are working.

The west has some pre-conceived ideas of where the foreign policy of Pakistan is made. Let me make it very clear it will be made at the foreign office. We have input from our national security institutes; there is institutional memory and we will engage with them for the betterment of Pakistan. Pakistan first.

When US makes foreign policy; doesn’t it take advice from

The CIA and the Pentagon. I know how the system works; I have studied Obama’s foreign policy mechanisms in details. We will put Pakistan first.

My priorities will be in line with the policy of the prime minister and our government. We have put together a task force under Dr. Ishrat Hussain on austerity measures. Every ministry has to have a different approach and we have to see what the others are doing, and Pakistan has to match to those levels.

We see the levels of corruption and see that corruption has destroyed the institutions of Pakistan. Until and unless we address this serious issue we will not move forward. We know the resistance and obstructions that will come our way, and we will take them on.

Obviously CPEC is a very important project; it is a game changer and our party supported it while in opposition too. The Chinese ambassador was in touch with me and I will be meeting him soon to get an overview on progress. There has been a stress on infrastructure, but we want to talk about when we enter the speech of socio economic development for the betterment of our people.”

Mati
Mati-Ullah is the Online Editor For DND. He is the real man to handle the team around the Country and get news from them and provide to you instantly.
Share
Facebook
Twitter
Pinterest
WhatsApp
Previous articleMirza Shahzad Akbar appointed special assistant to PM Imran Khan on accountability
Next articleThe Donkey King – Animated Movie